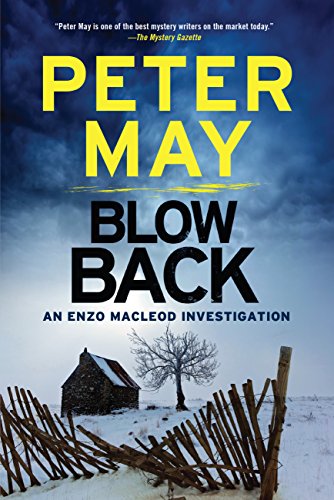 Peter May’s Enzo Macleod mysteries are growing on me, mainly because Enzo himself is growing. Enzo is a Scottish criminologist living and working in France. He has made a bet that he can solve seven famous unsolved French murders, and he’s working his way systematically through the list. Blowback is the fifth in the series, and this one takes him into the rarefied world of French haute cuisine.

Seven years ago, chef Marc Fraysse, who operated a three star (the highest rating in the prestigious Michelin Guide) restaurant in a remote French village, was murdered just when rumors were circulating that he was going to lose a star. Enzo travels to the village, where he meets an attractive local police woman who eagerly helps him with his inquiries (a pleasant surprise). He goes to stay at the restaurant/hotel, where the victim’s brother and widow make him generally welcome. But Enzo doesn’t trust them entirely, and has insinuated a personal spy into the staff.

Meanwhile, Enzo realizes that some tensions and feuds in the victim’s history echo broken relationships of his own – notably with a half-brother he never mentions to anyone, and the son he fathered with a woman who demanded he have no contact with the child. Hopefully he will find or make some second chances, and not succumb to the errors that brought Marc Fraysse down before his time.

I found Enzo Macleod kind of superficial when I started reading the books. I’m gratified to see him growing with each installment, becoming more and more a grownup and increasingly controlling his passions. I enjoyed Blowback. It also got pretty suspenseful toward the end.

Recommended with cautions for adult stuff.

One thought on “‘Blowback,’ by Peter May”