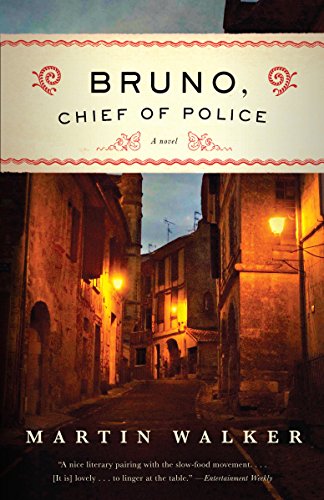 Benoît “Bruno” Courrèges, chief of police of the small French town of St. Denis, is a decorated veteran who served with the UN peacekeepers in Bosnia. If he wished, he could find exciting work in Paris, but he likes the life he has. He lives in a remodeled shepherd’s cottage, keeps a large vegetable garden, and coaches young men in soccer and tennis. He likes the slow pace of country life, where his biggest problem is generally tipping off local farmers when EU produce inspectors are on the prowl. He’s had enough action in his life, merci.

But action is coming to him. The first book in Martin (no relation) Walker’s popular Bruno series, Bruno, Chief of Police, involves the murder of an elderly Algerian refugee, whose body is found with a swastika carved into it. The old man was a decorated veteran of the French army, and his death ignites lingering passions from the German occupation, and contemporary resentment of North African immigration. Bruno will see his peaceful town torn by a riot and discover very dark secrets, leading finally to an imperfect – but arguably just – resolution. And there will be a little romance along the way.

I liked Bruno, Chief of Police quite a lot. It started out pretty much as a “cozy” mystery, but got rapidly dark, burrowing deep into human memories and motivations. Bruno is not the simple man he tries to appear, but neither is anyone else.

I’d be happy to read the next book in this series, but the publisher wants twelve bucks for the Kindle version, which is too much.

One thought on “Bruno, Chief of Police, by Martin Walker”