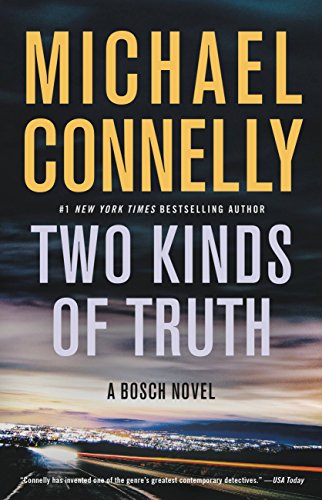 “Look, I’m sorry. But I wanted to catch these guys. What that kid did, the son, it was noble. When this all comes out, people will probably say he was stupid and naïve and didn’t know what he was doing. But they won’t know the truth. He was being noble. And there isn’t a lot of that out there in the world anymore….”

It’s amazing how Michael Connelly manages to keep the stakes high in his long series of Harry Bosch detective novels. At the beginning of Two Kinds of Truth I was thinking that the formula was getting a little old, but before long I was fully invested. Harry Bosch is a driven character, a man with a near-Christian sense of vocation, and you can’t help starting to care as much as he does.

Harry used to be a police detective in Los Angeles, but he’s past retirement, and now he works on a semi-volunteer basis for the police department in San Fernando, a small, autonomous enclave within greater LA. His official task is cold cases, which he loves, but because he’s the most experienced detective available, he ends up working current cases as well.

That’s what happens at the beginning of this book, when they are called to a double murder at a hole-in-the-wall pharmacy. Both pharmacists, a father and son, have been shot to death. The killers tried to make it look like a robbery gone sideways, but Harry and the other detectives agree that it looks like a hit. They learn that the son had reported prescription abuse to the authorities. Before he’s done, Harry will risk his life going undercover to unmask the killers and their racket.

Meanwhile, one of Harry’s own old cases has reared up to bite him. Long ago he and his partner got a young actor sentenced to death for the rape and murder of a young actress. The case was circumstantial, but solid. Now the condemned man’s lawyers are appealing to have the conviction overturned on DNA evidence, and accusing Harry of planting evidence. He will turn to his half-brother, “Lincoln Lawyer” Mickey Haller, to defend him, but he’ll turn over some rocks himself.

The unforgettable thing about Two Kinds of Truth is Harry’s almost religious passion for justice. (It was interesting to learn that his lifelong hero has been missionary David Livingstone.) His motto throughout the series has been, “Everybody matters or nobody matters.” That could be extended to, “Everything matters or nothing matters.” Harry lives in a world full of violence, hate, and injustice. He can’t fix that. But he can do something about this evil, the one in front of him. He can do something about that to make an effort toward balancing the scales in the world. It makes him a sort of a sad man, but it’s also kind of beautiful.