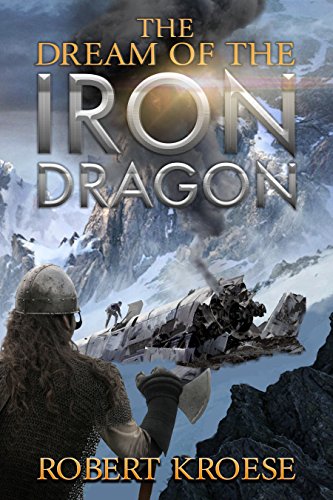 I was offered a free copy of Robert Kroese’s The Dream of the Iron Dragon, and I figured it’s a space opera with Vikings, I’ll give it a shot. I found it an entertaining read.

It’s the 23rd Century, and earth is no longer habitable. An alien enemy called the Cho-ta’an destroyed the planet, and now humanity survives on a handful of scattered earth-like worlds, grimly awaiting the day when the technologically superior Cho-ta’an will finish the job.

The Andrea Luhman is a small scouting ship, sent out to hunt for new habitable planets. They are not prepared for a mysterious message, sent from an unlikely ally who offers them a doomsday weapon that could turn the whole war around.

Soon they are racing home, pursued by a Cho-ta’an ship. A desperate maneuver sends them back in time, to earth in the 9th Century, and they crash-land in Norway.

King Harald Fairhair is at that point consolidating his unification of the country. The space people soon find themselves caught up in the resistance, using their rapidly diminishing weapons and ammunition, plus their technological knowledge, to help a chieftain in his campaign to avenge himself on Harald.

The Dream of the Iron Dragon is pretty good. I’m not personally a big fan of space opera, but I judge this pretty much the kind of optimistic military sci fi story Baen Books fans would welcome. As for the Viking elements, they could be worse. There were some errors – especially toward the end – but author Kroese has clearly done some serious research, and he manages to craft a plausible Viking world.

First of a trilogy. Recommended, with cautions for language and violence.

2 thoughts on “‘The Dream of the Iron Dragon,’ by Robert Kroese”