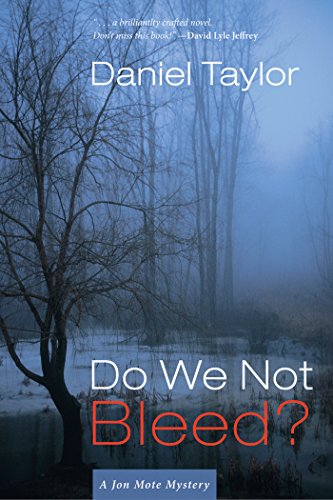 Daniel Taylor’s second Jon Mote mystery continues a superior, unconventional Christian mystery series. In the first installment, Death Comes For the Deconstructionist, Jon, a former English scholar who heard self-destructive voices in his head, solved the murder of his former academic mentor. He also experienced an exorcism – though he probably wouldn’t call it that. It’s true that the voices have stopped and show no signs of returning, but he knows Scripture well enough (as a lapsed Baptist) to know the story of the swept and garnished room.

As Do We Not Bleed? opens, Jon’s mentally retarded sister Judy, who lived with him in the last story, has returned (by her own choice) to New Directions, a group home in Wayzata, Minnesota. Having no better prospects, Jon has taken a job as a counselor there, permitting him to spend time with her. He finds that life in a care facility for Specials (the current favored euphemism for the retarded) has some similarities to life in the English Department. Everyone is obsessed with politically correct language, as if you can change reality by making up new names. But Jon enjoys working with his group, who are colorful individuals and see the world in interesting ways.

Then one day one of the residents, the brain-damaged daughter of a very rich man, disappears. Soon her body is found in a nearby wetland. Neighbors are inclined to blame the group home residents. Tragically, after the woman’s body is found, evidence is discovered pointing to J.P., a member of Jon’s group. Jon finds it impossible to believe that gentle J.P. could have done something like that, but it takes a troubling conversation with an old nun and the innocent (and legally useless) testimony of another resident to persuade Jon to take the risk of confronting the true murderer.

Long on heart and faith (though Jon has little), somewhat short on plausibility, Do We Not Bleed? is a heartwarming and touching tale. I think part of its lesson is a distinction Taylor draws between being sure and being certain, which (I confess) has never made a lot of sense to me. But he also rephrases C. S. Lewis’ argument that the existence of a hunger argues the existence of something to satisfy that hunger, which pleased me. I personally enjoyed Jon’s extended monologues about God, the world, and everything, but they might not suit every reader’s taste.

The biggest treat of the book, I think, is the depiction of Judy. She is a masterpiece of character building – a person who is at once not intelligent, and yet wise. I’m not sure I could carry that off, myself.

The story is set around the end of the Clinton Administration, and I thought I recognized a couple anachronisms. Jon speaks of Marshall Field’s department stores in reference to his childhood, and if my math is right it would have been Dayton’s at that point in time. He also has coffee at a Starbucks, and I’m not sure we had any around here then (though I was living in Florida, and might be wrong).

Still, Do We Not Bleed? was a very satisfying book for me. Minor cautions for language and mature (or immature) situations.

One thought on “‘Do We Not Bleed?’ by Daniel Taylor”