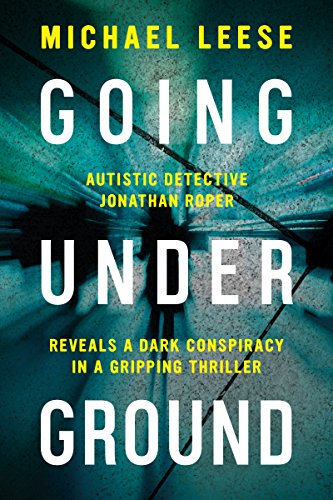 I’ve often suspected that I’m somewhere on the lower end of the autism spectrum. Whether I am or not, I’ve always found autism an intriguing subject. So I purchased Going Underground, by Michael Leese, a novel with an autistic hero. It didn’t grab me, though I finished it. I’m really at a loss to say why I didn’t like it better.

The story begins with the murder of a prominent genealogist by his trusted secretary. Then a beloved philanthropist’s body is found, dismembered, in a cellar. Scotland Yard Detective Inspector Brian Hooley is sent to investigate the second case, and he brings along his favored assistant, Jonathan Roper. Jonathan has a bad reputation at the Yard because he nearly blew an important arrest before his recent suspension. But Hooley believes in him. Jonathan is autistic, and his social cluelessness makes him unpopular with other detectives. But he has amazing abilities to observe and process information. He justifies Hooley’s trust when he quickly locates hidden evidence no one else would have found. The evidence leads them to a genetic research company, where (they eventually learn) genuinely evil experiments are being carried on behind the respectable façade.

I can identify no failure in the writing in this book (except for a lamentable tendency to close individual paragraphs within extended monologues with quotation marks, which could be the fault of an editor converting the text to American punctuation). But somehow the characters never came alive for me. Maybe I’m not as comfortable with the portrayal of autism as I thought I was.

Anyway, I can’t enthusiastically recommend Going Underground, but I have no real objections to make either. Cautions for mature themes.