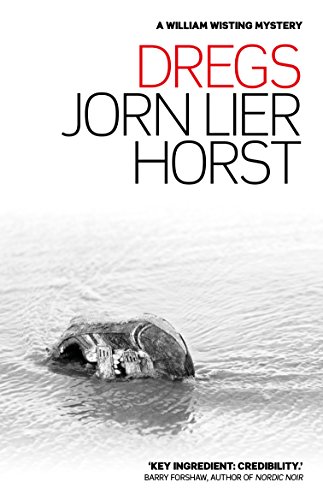 Dregs is not the first book in the Wisting series (nor the first I read) but it’s the first in sequence to be translated into English, so I’m reviewing it first. The story begins with the discovery of an athletic shoe (a “trainer” as they call them in Europe), washed up on a beach. The shoe is a left shoe, and it contains a human foot. A few days later another shoe and foot wash up – but it’s another left foot. And then there’s another, also a left.

The inquiry focuses on four older local men who have recently disappeared without a trace. A couple women have also disappeared. It is discovered that these men had a bond – they were involved in a post-war military defense group, sanctioned by the government. With the memory of the German occupation fresh, the government had authorized small units of civilians prepared to form an underground resistance in case of occupation by the Soviet Union.

But why have these old men disappeared – probably murdered – just now? Who would benefit from their deaths?

Dregs, in my opinion, was not the best book in the series to start the translations with. I found it a little dull before things livened up for the climax. And that may have to do with the translation. The diction is very literal and wooden here. Awful in places. The translator is the same one who did the later books, which are considerably better, so maybe she was rushed. In any case, you should know that it gets better.

I like William Wisting as a detective hero. He reminds me a little of Harry Bosch – a centered and highly motivated man who cares about his job and believes it makes a difference. I have noticed no philosophical or political agenda in the Wisting books, except (perhaps) for some conservative tendencies. The author is a retired cop. I’m enjoying the series, even though this particular book isn’t the best.

One thought on “‘Dregs,’ by Jorn Lier Horst”