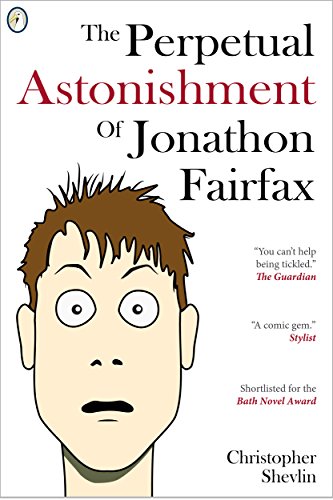 Occasionally you run into a book that doesn’t fit neatly into any of your existing mental categories. Then there’s a temptation to pan it because it’s not the kind of book you think it ought to be.

But that’s unjust. The author should be judged on the basis of what he accomplished, not what you were expecting.

Christopher Shevlin is a pretty Wodehousian writer. And because of that, it’s a little jarring when actual murder enters the stage of his book. In a Wodehouse novel, the worst thing you’ll see is the abstraction of a silver cow creamer, or the purloining of a prize pig, or the alienation of a French cook’s services.

But The Perpetual Astonishment of Jonathon Fairfax begins with the murder of a fairly innocent middle-aged woman. And it’s played for laughs.

That kind of threw me for a loop.

But I stayed with it, because it was a very funny, very well written book.

Jonathon Fairfax is an ineffectual young man with deep insecurities, living in London. So he’s none the wiser when he (inadvertently) helps a murderer to find his victim’s address, then makes friends with two fashionable people in a disreputable café, and finally meets “the most deeply and woundingly beautiful girl [he] had ever seen,” all in a single day. He stumbles his way through an improbable courtship while getting unintentionally involved in the exposure of a massive government conspiracy.

“What’s your next move?”

“Yes you need a next move.”

“Well, I’ve got tomorrow morning off, so I thought I might spend that thinking about her. Basically, my plan is to maybe just romantically obsess over her but not really do anything about it.”

It was the first time in his life that Jonathon had seen in real life a man whom he had also seen on television. Thompson was smaller than he had expected, and much more detailed.

There are all the pleasure of a Wodehouse story here, particularly in felicitous word choice and phrasing. Added to that is the genuine dramatic tension that rises from a plot where life and death are truly at stake. Plus there’s a very charming romance of the “meet cute” sort.

In the end, I liked it a lot. Cautions for language and mature scenes.

2 thoughts on “‘The Perpetual Astonishment of Jonathon Fairfax,’ by Christopher Shevlin”