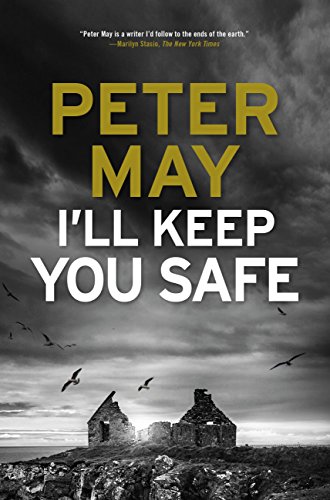 Sometimes a book can be less than optimal in certain respects, but make up for it wonderfully in the sheer reading experience. For me, Peter May’s I’ll Keep You Safe is one of this sort.

Niamh and Ruairidh McFarlane are childhood sweethearts who grew up together on the island of Harris in the Hebrides. As a married couple, they took over ownership of “Ranish Tweed,” a small operation producing a cloth that’s similar to Harris Tweed, but softer and lighter. To their amazement, their tweed was discovered by a rising young designer, who made it the center of his whole collection that year, and before long they were running a large and profitable operation.

But there are shadows in their lives. Their parents still disapprove of their marriage, due to old injuries that the book reveals in stages. There are professional enemies, and false friends.

When the story begins, they’re in Paris for a fabric fair, and Niamh is suspicious, for the first time in her life, that Ruairidh might be having an affair. Then he enters a cab with the woman she suspects is his mistress, and the cab explodes. Suddenly a widow, wracked with guilt and doubts, she must return to her home and face the continued hostility of her in-laws, the suspicions of the police, and a growing recognition that the killing is not over. Someone wants her dead too.

I was not surprised by the final revelation of the killer in I’ll Keep You Safe. And there was an earlier plot surprise that also didn’t surprise much. But I didn’t care, because the ride itself was the reward. Author May, as he has shown many times before, excels in painting evocative descriptions of Hebridean geography and nature. It might be the next best thing to visiting the place.

One thought on “‘I’ll Keep You Safe,’ by Peter May”