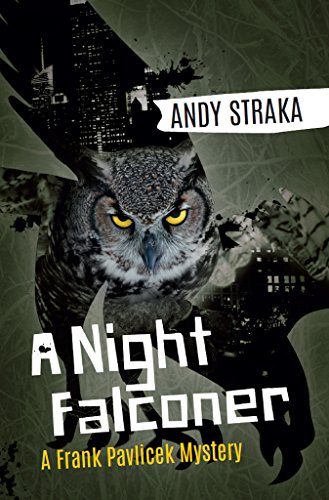 As you’ve probably noticed, when I find a book series I like, I’m likely to read my way through it chronologically. And that’s what I’m doing with Andy Straka’s enjoyable Frank Pavlicek series. A Night Falconer is installment number four.

This time out, Frank finds himself leaving his current natural environment to return temporarily to a former one – Manhattan, where he once was a cop. The residents of a luxury condo are losing their pets, and one of them – an assertive woman doctor – is convinced her cat was killed by a Great Horned Owl. Not only that, but she thinks she saw a falconer carrying the owl, running off in the darkness. Crime mixed with falconry? Who else do you call but Frank Pavlicek, Virginia PI and accomplished falconer? So New York PI Darla Barnes, an old friend of Frank’s from the force, asks him to come up and investigate.

It seems like a strange job, but Darla’s a friend, so Frank drives up to check it out, bringing along his new partner – his daughter Nicole. What they discover is much bigger and even stranger than the idea of someone hunting in Central Park with an owl.

I didn’t consider A Night Falconer the best of the series. The plot seemed to resolve itself unnecessarily rapidly at the end. But it wasn’t bad either. As usual, no foul language, only muted violence, and the sex happens offstage (the Christian morality of these books is generally admirable, though Frank seems to think sex before marriage is OK if the couple is engaged, which I consider debatable).