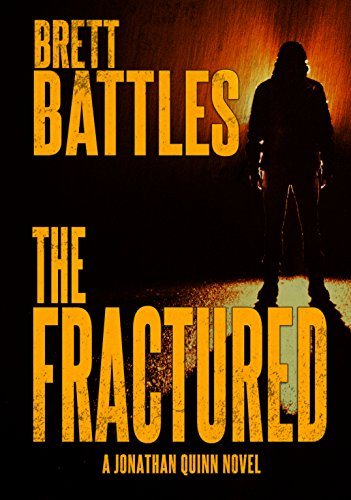 When I discovered there was a new entry in Brett Battles’ enjoyable Jonathan Quinn series, it was the work of but a moment for me to download it for my Kindle. The Fractured is an enjoyable thriller, like all its predecessors.

When The Fractured begins, our hero, Jonathan Quinn, and his wife Orlando are still recovering from the disaster that occurred in the last book – where an important member of their team died. Not only did they lose that person, but there was a rupture with Quinn’s old protégé, Nate, who has vanished.

But the bills need to be paid, and they’re delighted when they’re contacted by an old friend, who is trying to revitalize the secret semi-government office that used to employ them as “cleaners” (removers of evidence after “wet ops”). There’s a chance to get inside the compound of a white nationalist militia. This job gets done successfully.

But there’s a bonus. What they find in the compound gives them a chance to nail the money man who’s been funding the group. And not only can they get him, but they might also get a mysterious international arms merchant, a man who keeps his identity so secret that few have ever seen his face.

But one of the few who has is the missing Nate.

If they can locate Nate and persuade him to cooperate, they may be able to prevent an apocalyptic disaster in the United States.

The Jonathan Quinn novels are neither deep nor fancy. But they’re fun and they move fast. Recommended. Cautions for language and violence, but not as bad as many.