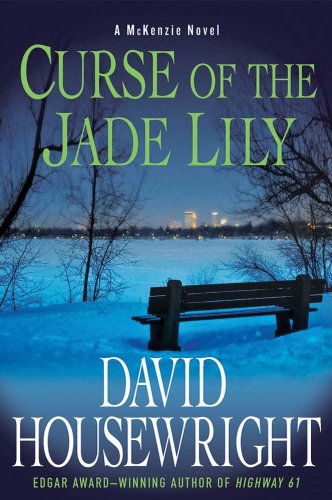 Her smile reminded me of the promise on a package of lightbulbs I had recently purchased – “Lasts up to 10 times longer while using 75% less energy.”

Author David Housewright got on my wrong side near the beginning of Curse of the Jade Lily. He explained how to tell Norwegians from Swedes based on how they spell “son” in the names (and got it wrong), and then went on to discourse on racism, for no pertinent reason. But I persevered, and all in all the book was OK.

Housewright may be messing with us, though. Sometimes, for instance, he gets his directions diametrically wrong. In this book, for instance, he has Mac go east from Minneapolis to get to Theodore Wirth Park. It ought to be west. Maybe it’s a gag.

As you probably recall, Rushmore “Mac” McKenzie retired from the St. Paul Police Department a few years ago, when he accepted a multi-million-dollar finder’s fee from an insurance company. That good fortune comes back to bite him in Curse of the Jade Lily. A rare Chinese sculpture (the eponymous lily) has been stolen from a small Minneapolis art museum. The thieves have offered to sell it back, but they have one condition – Mac has to deliver the money. Because the insurance company asks him for the favor, and because of a certain amount of pressure from various levels of government, he agrees. Then the suspected thief is found murdered, and someone else is murdered during the ransom delivery, and the whole thing turns into a complex mystery, with elements of international intrigue.

It’s complicated, and Mac gets hurt multiple times, but he figures it out in the end. Author Housewright put my back up a little with his Norwegian crack, but not enough to put me off the series. Recommended with cautions for language, mature themes, and anti-Norwegian bias.

2 thoughts on “‘Curse of the Jade Lily,’ by David Housewright”