South Dakota may already be on your Top 50 list of American states you want to visit, but the state’s tourism czar hopes to bump up your expectations by comparing the Mount Rushmore State to Mars–not the maker of little chocolate candies that melt in your mouth instead of your neighbor’s thieving hand, but the red planet, the fourth rock from the sun. “Why die on Mars,” they ask, “when you can live in South Dakota?”

Why? We’ll tell you why.

Mars is a cold planet with way more carbon-dioxide than South Dakota, and it does have some snow, but it keeps its snowfall in carefully drawn boundaries around the polar caps. Does it fall on the streets and villages of Mars, clogging traffic on Martian highways? Not on your life.

Mars keeps its snow in neat areas, out of trouble. (Source: NASA)

On the other hand, South Dakota lets the snow fall all over the place—on cars, on vacationing skiers, and even on grade-school children trying to get a bit of work done outdoors. In the city of Lead, the average annual snowfall is almost 200 inches. That’s over 16 feet! You won’t see that on Mars.

Nothing Martian about pushing a shopping cart in the snow.

The highest mountain on Mars holds the record for mountain height in the entire solar system. Olympus Mons is about 17 miles high. Mount Everest is only 5.5 miles high. What does South Dakota have? Harvey Peak, just a few miles west of Mount Rushmore, is a mere 7,244 feet. Ha!

3. Hawaiian Volcanoes Mean Paradise Is Near

Olympus Mons (which is Latin for Mount Olympus, because Martians speak Latin, or used to, maybe) is seventeen miles high because it’s actually a shield volcano. Over the years, lava has oozed out of the cracks and built up layer after layer. Because there are no shifting plates beneath it, Olympus doesn’t move off its magma source. It just swells higher and higher. Mauna Loa, the main volcano in the big island of Hawaii, is one of these, so Mars is kind of like Hawaii, and Hawaii is way better than South Dakota. Everyone knows that.

4. The Deepest, Longest Valley From Here to Pluto

What’s more fun than hiking up the tallest peak in the solar system? Hiking down to the lowest valley. Mars’ Valles Marineris, discovered in 1971, is six miles deep at some points and runs 2,500 miles long. You won’t find a valley like that in Hot Springs, SD. You won’t find a hot spring either, but why would you want that on a thousand-mile walk? You’d want a cool Martian beverage instead. The dude knows what he’s talking about. (Source: Pinterest)

5. Mars Has No Extraverts

South Dakota may not have many extraverted people, but the simple fact is more annoying extraverts live in South Dakota than on the entire red planet. There are plenty of extraverts even in Deadwood, which contrary to what you may have heard on the news does not have only dead people. They’re alive, and some of them will talk to you. Loudly.

No obnoxious people on Mars. None. (Source: Imgur)

6. Mars Has No Mammoths, Woolly or Non-Woolly

Dinosaurs died out before progressing to the point of interplanetary travel, so they didn’t make it to Mars. Of course, we haven’t either, but the point is there will be no mammoths kicking around in Valles Marineris when we do get up there. Not so in South Dakota. In Hot Springs, they have an “active paleontological dig site, which boasts the largest concentration of mammoth remains in the world.” They’ve dug up 61 mammoths so far. That’s scary. Nothing like this can be found on Mars.

This nightmare is comingagetcha any minute now.

Mars has a maze like nothing you’ve ever drawn on paper. Noctis Labyrinthus, the Labyrinth of Night, is the largest in the solar system. It’s a crazy collection of cracks, crevices, and fallen debris. No one who has gone in has ever come out. This is your destiny, isn’t it? This is your frontier. Just think of the t-shirt you could bring home after conquering this monster. (Source: NASA)

8. No Funny Town Names on Mars

There are no towns with funny names on Mars. In fact, there are no towns at all. In South Dakota, however, you could end up staying at a place called Lead (pronounced “leed” after the pioneers mocked the original pronunciation), Peever (a.k.a. My Little Pet Peever), or Big Stone City (“The conference is in some big stone city in South Dakota.” “What? Like the Flintstones?”). Or it could be Buffalo Gap (it don’t smell good there) or Blunt (how do you think they talk in Blunt?) or Dante (where everyone’s in your circle of friends).

They may have buttes on Mars, but no Eagle Butte. (Source: NASA)

Mars has double the lunar coverage of the Mount Rushmore State. Its two moons, Phobos and Deimos, orbit the planet at uneven rates. Phobos zips around Mars three times a day at a very close orbit. Deimos hangs back, orbiting less than once a day. As for their names, Phobos means “fear” or “panic” and Deimos means “dread” or “Fly, you fools!” Think about reading Goodnight, Moon to the children with that in the back of your head. Good times. 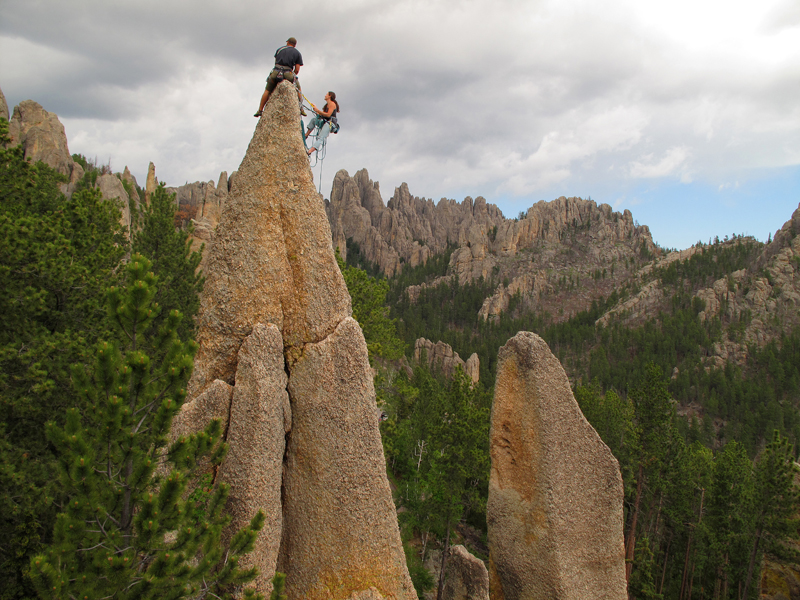 You may see The Needles in South Dakota, but not two moons. (Source: Dawn Kish Photo)

10. You’ll Be as Far Away from Sitting Bull Crystal Caverns as You Can Get.

You may have to experience this one yourself. When you take a forty-five minute walk through Sitting Bull Crystal Caverns, you’ll see rainbow refractions, stalactite chandeliers, and some very long “dog-tooth spar crystal.”  You might actually like the feeling of walking through a giant geode that looks as if it could eat you at every corner, but you’ll be happy to know that on Mars, you’ll be as far from that cavern and everything else in South Dakota as you can possibly get.

2 thoughts on “10 Ways South Dakota Is Worse than Mars”