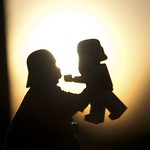 Andrew Barber says, “I don’t want Jedi; I want my childhood back.”

Thanks to Charles Taylor’s work A Secular Age, I’ve come to believe the most important question about big entertainment is not “what is this movie/videogame/album about?” but “what is it for?” I don’t think we need another article analyzing the nitty-gritty thematic details of Star Wars. It is a simple, well-told tale of good versus evil with memorable characters and mammoth effects.

What I’m interested in is the function of Star Wars. When thousands of fans line up outside of theaters on December 17 to see Star Wars: The Force Awakens (of which I will be one), what will it be for?

His post links to another one, reviewing a presentation of Charles Taylor’s A Secular Age with an application to the Star Wars prequels. What went wrong with those first three episodes added onto the well-loved space epic? Mike Cosper blames secularism.

The original trilogy, in all the ways it left questions open and invited imagination, in the way it used effects in a sparing way, was enchanted. It was an open world with questions to explore and a sense of the unknown. The prequels, then, made the mistake of disenchanting the world. The mysteries all had answers. Even the overwhelming presence of CGI has a “secular age” parallel: the overwhelming culture of production and consumption. When every moment is a visual feast, nothing is worth celebrating.