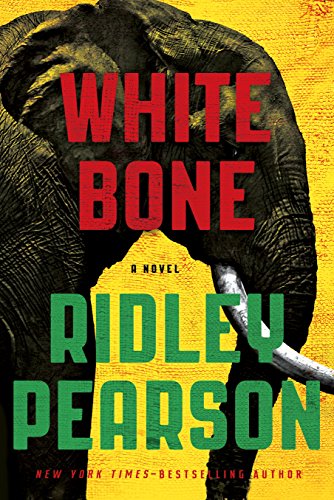 I’m a fan of Ridley Pearson’s Lou Boldt police procedurals. But he seems to be easing off on Lou these days, which is understandable considering Lou’s age. Instead he’s moving into the currently hotter genre of the international thriller, with his Risk Agent novels starring John Knox and Grace Chu. They are contractors who do occasional work for Rutherford Risk, a private agency specializing in hostage negotiation and extraction. I liked the first book, so I bought this second one, White Bone.

The title is a reference to elephant ivory. In this story, Grace, a talented computer technician, is sent to Kenya to look into the records behind a spectacular – and cruel – crime, where precious vaccine was stolen and replaced with a dangerous substitute, resulting in many deaths. Suddenly she drops off the grid altogether, and John Knox – somewhat to his own surprise – is concerned enough to leave his mentally disabled brother, his only family and the center of his life, at home while he goes to Africa to search for her, clashing both with the police and with ruthless animal poachers.

What follows is a white knuckle adventure story. While John runs down slender leads with increasing desperation, Grace is forced to revert to her most primitive instincts in order to survive in a suddenly prehistoric environment.

The book delivered on its promises of suspense and adventure. I wasn’t enamored of it, myself, because wilderness survival stories aren’t a flavor of literature for which I have a lot of taste. But people who like that sort of thing will find Grace’s survival story riveting. I’ll admit I was also troubled a little by some of the other story elements. The book is pretty solidly in favor of shooting poachers on sight, an idea that bothers me because it puts animals before humans (though I probably wouldn’t be as troubled by Old West ranchers hanging rustlers, so that may be prejudice on my part). Also, there is a minor subplot involving a group of hostages, and no sympathy whatever is expended on them.

But White Bone is a well done, exciting thriller that will probably please many readers more than it pleased me. And I’ll read the next book in the series. Cautions for the sorts of things you’d expect.