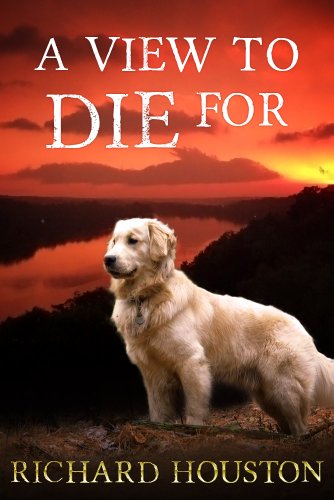 I was looking for something a little less intense than the books I’ve been reading recently, and A View to Die For, by Richard Houston, seemed to fit the bill. And it did, more or less. It was an amiable little mystery. A little too amiable, perhaps.

Jacob Martin is a recently divorced Coloradan, who lost his job in computer programming and has been getting with handyman work. When his mother calls and tells him his sister has been arrested for the murder of her husband, he sets out home for Missouri to help out, along with his golden retriever, Fred. His sister is a promising suspect, as her two previous husbands have both died suddenly. She is sure Jacob can help, because he always used to figure out the murderer when they used to watch “Murder, She Wrote”(!).

The story kept me reading to the end, but it seemed a little loose and meandering. The writing was generally OK, though artless, but occasionally words were misused (such as “prolong” for “postpone”).

There are a couple sequels out there, but A View to Die For didn’t grab me enough to persuade me to download them. Your mileage may vary. Cautions for adult themes and language.

2 thoughts on “‘A View to Die For,’ by Richard Houston”