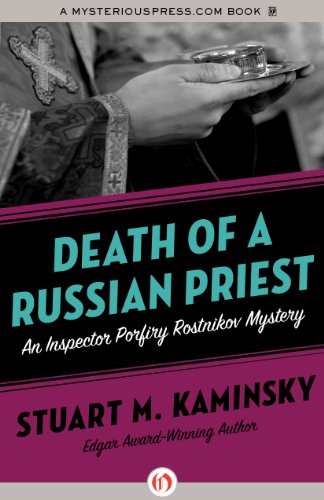 I’m not going to review the whole series, which I haven’t finished yet, but Death of a Russian Priest stood out for me. In the new Russia, the Orthodox Church is reasserting itself, but does not stand unchallenged. Father Vasili Merhum of the village of Arkush, after performing his final mass before leaving town to lead a protest against government policies, is murdered with an ax. Porfiry Rostnikov is sent to investigate, along with a faithful member of his team, Emil Karpo. Karpo is a troubled soul. A dour, impassive man who looks like a vampire, his whole life has been spent in monk-like devotion to the Communist Party. Now his god has failed, and he operates on automatic pilot, troubled by frequent migraines. What made this book particularly interesting to me was Karpo’s reluctant attraction to what he sees in the church, the only institution that appeals for the same kind of commitment he longs to give.

It’s fascinating that a Jewish author like Kaminsky, who has no reason to love the Russian Orthodox Church (rather the opposite), presents a pretty appealing picture of the Church as a living institution, though very real moral failings within the Church are crucial to the plot. I’m not sure we’re supposed to believe that Emil Karpo will ultimately be converted, but one character in the book is convinced of it.

In a parallel plot thread, young detective Sasha Tkatch, another team member back in Moscow, is assigned to hunt for a young Arab girl, the daughter of a Syrian diplomat, who has disappeared. Sasha is nearly losing his mind, troubled by his approaching thirtieth birthday, his wife’s difficult pregnancy, his guilt over previous mistakes that caused injury to a partner, and his suppressed attraction to a new female partner. He manages to close the case without going crazy, but it’s a near run thing. However, the conclusion brings comfort.

The whole story, like all the entries in this series, is fascinating and full of profound human understanding, which was Kaminsky’s forte. I enjoyed it a lot. Very little to caution you about in terms of content, except for intensity.