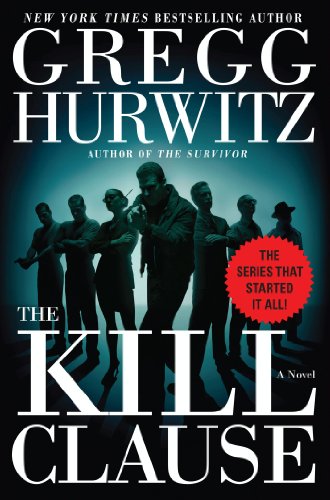 A book about vigilantes is no novelty. And the broad story arc of Gregg Hurwitz’s The Kill Clause is entirely predictable. The magic is in the… execution.

Tim Rackley is a decorated Deputy US Marshall, former military. When his only child, a little girl, is kidnapped, raped, and murdered, and the killer gets let off on a technicality, something dies inside him. He is approached by a representative of a secret group, “The Commission.” Their high-sounding mission is to find people clearly guilty of terrible crimes, who have been released by the courts. They will “execute” them in a fair, just manner. Tim’s job is to carry out the executions.

But his integrity and compassion are too great to work long that way. As the Commission comes apart and two dangerous members go rogue, Tim learns terrible secrets about his own tragedy. He finds himself racing against time to protect the very men he had planned to kill – including the killer of his daughter.

The conclusion of the book is a masterpiece of irony.

Gregg Hurwitz is a big writer, with a screenwriter’s sensibilities. That means high drama, high tension – and a certain level of improbability in the plot. What makes The Kill Clause work so well is the treatment of the characters – even the most repellant of them have their private stories, which are treated with empathy and respect. And the depiction of Tim’s grieving process (and his wife’s) is moving.