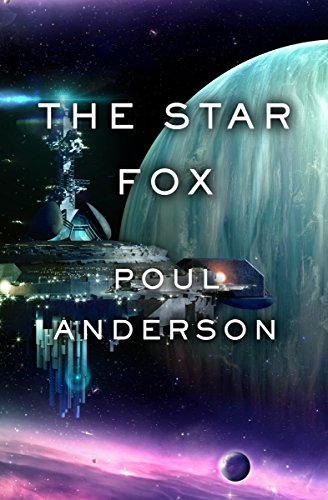 What I liked best about this book was that it’s a military science fiction novel written before political correctness. Thus, Poul Anderson’s The Space Fox is blessedly free of tiny little girls with mystic ninja skills who throw 200-pound men around in the manner of Summer Glau.

Centuries in the future, the earth is ruled by a Federation, which also has jurisdiction over various space colonies. One of the most promising of those colonies, New Europe (settled by Frenchpeople), has been conquered by an alien race, the Alerians. The Alerians report that all the human settlers have (unfortunately) been killed. The earth government, dominated by pacifists, is inclined to accept the fait accompli and cede the planet to them.

Gunnar Heim, industrialist, is not so sure. He knows New Europe and doesn’t find the Alerian story plausible. He expects that the humans there survive in the wilderness, and are waiting for relief from earth. When he meets a Hungarian folk singer who has brought evidence of just that, but can’t get a hearing from the government, he starts moving. With the help of a combative French (!) legislator, he concocts a scheme to exploit a loophole in the law to set out in his own war ship, the Space Fox, becoming a latter-day privateer.

The Star Fox was recommended to me by a friend as right up my alley, and it has numerous theoretical attractions for me. It was written by a Danish-American who grew up partly on a Minnesota farm. The hero, Gunnar, is a Norwegian-American who lapses into Norwegian in his conversation from time to time. And it was written as a commentary on the Vietnam War, which Anderson supported, as did I.

And yet, I didn’t love it as much as I should have. I don’t know what it is that puts me off about Poul Anderson. I’m in the habit of criticizing his characters, but I couldn’t really find fault with the characters here. Gunnar especially is very well drawn, and I was even moved by his troubles from time to time. Yet when I was finished, I had no great yearning to pick up another Anderson. So I guess it’s just me.

On that understanding, I recommend The Star Fox. In keeping with publishing norms in its time in history, it has no elements that make it unsuitable for any age of reader likely to enjoy it.