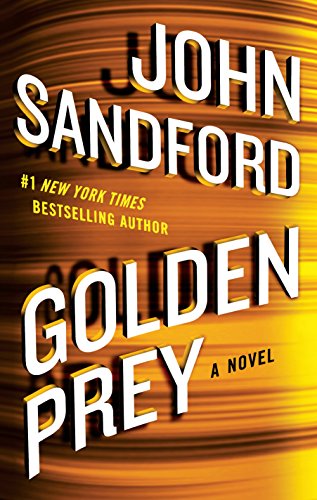 If you like John Sandford’s Prey novels, you’ll probably like his latest, Golden Prey. I do, and I did.

Golden Prey is pretty much written to pattern, except that the locations and the cast of characters have been shaken up. Hero cop Lucas Davenport has left the Minnesota Bureau of Criminal Apprehension and joined the US Marshal’s Service. His unique status, as one who saved the life of the woman expected to be the next president (clearly modeled on Hillary Clinton), allows him, unlike other marshals, to be selective about his assignments. He holds out for “interesting” jobs, which means what he’s always done best – pursuing serial killers.

This time he goes to the American southwest to hunt a couple of stick-up men who ripped off a huge money delivery meant for a drug cartel, killing several people in the process. Meanwhile a pair of killers sent by the cartel are on the robbers’ trail as well. Their investigative methods are not subtle – they torture to death anyone they can find who knows their targets.

Lucas teams up with a female/male/black/white team of FBI agents to catch the robbers before the cartel killers can get to them, meanwhile trying to identify the cartel killers’ next targets so they can be protected. There are a lot of interesting opportunities for moral ambiguity, balancing off our sympathies as awful people are pursued by even more awful people.

Golden Prey breaks little new ground. It’s written pretty much to pattern, and if you like the pattern, you’ll probably enjoy the book. Cautions, as usual, for lots of black cop humor, foul language, and violence.