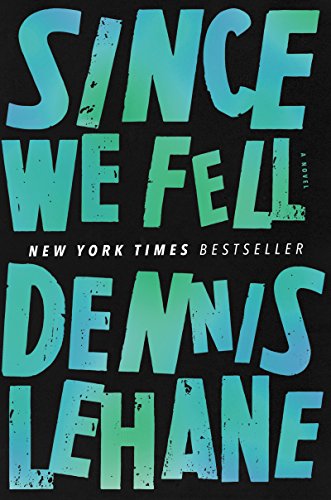 “Who was your father?” She turned her chair toward him. “Your real father.”

“Because he was left-handed?”

He shook his head. “Because he never met a place or a person he wouldn’t leave….”

This one, it seems to me, is a bit of a departure for Dennis Lehane. Not in the sense of being less dark than his other work, but Since We Fell has the form of something like a light romance/caper novel. Except in a very minor key. Because this is Lehane, after all.

Rachel Childs got off to an insecure start in life. Her single mother, briefly famous as a pop psychologist, controlled her daughter through manipulation. One of her chief manipulations was her refusal to tell Rachel who her real father was. After her mother’s death, Rachel tried to solve that mystery (there is, I think some existentialist subtext here), with disappointing results.

Her promising career as a television journalist crashes and burns one day when, while reporting on a disaster in Haiti, she has a full-blown psychological meltdown on camera. After that she sinks into agoraphobia and sees no hope for the future.

And then Brian Delacroix, a past acquaintance, re-enters her life. He is charming and cheerful, infinitely patient with her, and genuinely devoted. With his help, she begins to find the courage to face the world.

And that’s when everything starts going south in serious ways.

I won’t tell you more about the plot, because I don’t want to spoil the fun. Since We Fell is a weirdly compelling novel which mixes romance with stark realism, and offers some major surprises (a few of them fairly improbable). I thought it was a great read, but also thought it morally questionable.