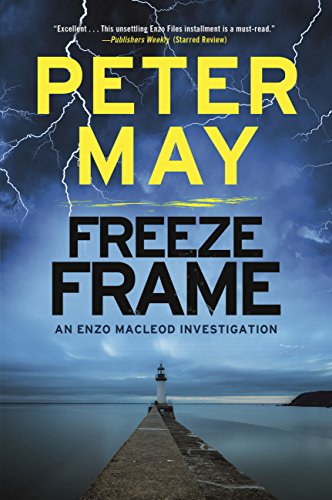 This is the last book in the Enzo Mysteries series that is currently available for Kindle.

In Freeze Frame, police forensic expert Enzo Macleod, who lives and operates in France, takes up a cold case involving the murder of an English citizen shot to death 20 years earlier in his home on an island off the Brittany coast.

This book departs from the series’ usual protocols. Enzo is on his own this time, not surrounded by his supportive team of two daughters, their boyfriends, and his female assistant. And this story assumes the form of a classic, “cozy” puzzle mystery. The murder victim had asked, before he died, that his study be preserved exactly as he left it, until his son returned. His son, he said, would immediately understand certain clues he’d left. Unfortunately, the son died before ever seeing the murder scene. His (the son’s) widow has preserved the study untouched ever since. It’s Enzo’s challenge to decipher a puzzle involving secrets and private jokes shared by two men long dead.

I liked Enzo a little more in Freeze Frame than I did in the previous books. He actually exercises some sexual restraint this time out, and a personal challenge that confronts him finds him taking what I consider the right side on a controversial issue.

I’d read the next Enzo book if the Kindle version were available, but for now I’ll be patient. Recommended, with cautions for what you’d expect.