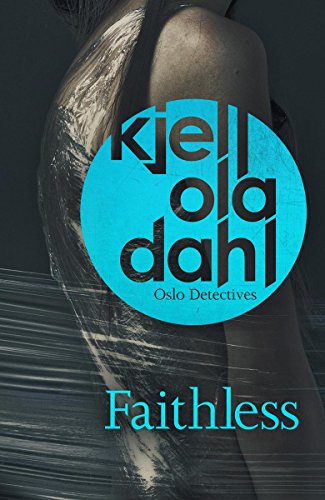 Oslo police detective Frank Frølich stops a woman leaving a business he’s surveilling in connection with a series of thefts. He searches her purse and finds drugs. That’s not a major crime in Oslo; she pays a fine and goes home.

The next night, Frank goes to an old friend’s engagement party. His friend introduces him to his fiancée – who turns out to be the very woman Frank arrested the night before.

Shortly thereafter, that same woman is found murdered, naked in a dumpster.

That’s how Faithless, by Kjell Ola Dahl, begins. It’s one of the “Oslo Detectives” series, which follows Frank and his older partner, Gunnarstranda (who doesn’t seem to have a first name, or at least I didn’t catch it).

The story was well told, and pretty suspenseful. The translation got clunky now and then, but I’ve become more tolerant of clunkiness since I started translating books myself.

Indeed, the story was so interesting that it wasn’t until the very end that I realized how grim and nihilistic the whole thing had been, right up to the climactic scene, which involves a hand to hand fight in a waste treatment plant. Well, what do I expect from Scandinavian Noir?

I was ready to buy another book in the series, but I accidentally bought a stand-alone by the same author. It appeared to be a thriller about drug dealers and junkies, and I quickly lost heart and just gave it up.

But Faithless is a well-done cop thriller, and I can’t disrespect it. Cautions for language, violence, sex… pretty much everything.