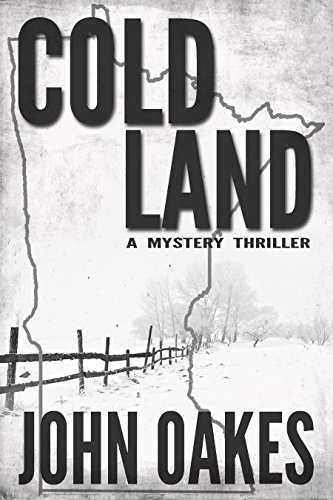 Another mystery set in Minnesota. I keep buying these things. Was John Oakes’s Cold Land more satisfying to me than the previous suspects? Read on and learn…

Jake Adler is a proud Texas Ranger. But he loves his wife, who left him, taking their two daughters, to go home to Minnesota. So Jake bit the bullet and drove north, lured by a job opening in Minnesota’s Bureau of Criminal Apprehension.

But this isn’t the elite, professional BCA so many of us know from John Sandford’s Prey novels. The BCA in this novel is a moribund organization, crippled by budget cuts. Just a few agents wander its empty office building, and those are mostly low achievers dumped by other agencies. This shocks Jake, but what’s worse is that he’s told his application (despite his credentials) will have to go in the queue with others, and he must wait a couple weeks for a decision.

But there’s a secretary in the center of the wreck of BCA, one of those indispensable, competent women who keep organizations afloat. She tells Jake, confidentially, that if he goes along to help Jerry Unger, a veteran agent, with a petty fraud case, she thinks she can find a way to get him hired. So Jake accompanies Jerry on that not-very-promising assignment. Only they discover a body, which makes it a murder investigation, and Jerry and Jake are now competing with other cops to thwart what gradually is revealed to be a major hijacking plot. Along the way, Jake will make shocking personal discovery.

I guess the portrayal of Minnesota is only fair. In so many novels, we see the south through northern eyes, and get an endless vista of gap-toothed, inbred rednecks. In this book, we have Minnesota viewed through southern (Texan) eyes, and the prospect is no more appealing. Minnesota seems to be full of trailer trash too. In fact we see little of the state here besides blighted neighborhoods, and the weather’s cold to boot.

I didn’t take these descriptions personally (though I wondered what Oakes has against Anoka, for which he reserves special derision. I always thought Anoka kind of a yuppy, arty place). I also found the plot a little hard to follow (which may be only a comment on me).

My real problem was with the tone of the thing. The book has a sort of a black humor voice, with serious crimes yoked to light dialogue. John Sandford finds a balance when he writes this kind of story, but Cold Land didn’t entirely gel for me. The various plot elements seemed to work against each other.

But author Oakes shows promise. I think he’ll improve with time. Cautions for the usual stuff. Some themes seemed conservative to me, but a couple shots were taken at Christians.