After borrowing this book from the public library, I found that I’d already read and reviewed an earlier novel in the Jonathan Stride mystery series. I said I found it well written, but I didn’t love it. That’s pretty much my reaction to Alter Ego, Brian Freeman’s ninth in the series. But I read it free, so why complain?

Jonathan Stride is a police detective in Duluth, Minnesota. His two chief subordinates are an Asian-American woman and his wife. Both, needless to say, are gorgeous. As is also his teenaged adopted daughter, a former prostitute whom he and his wife more or less rescued, and who is beginning to reintegrate her life.

It’s big news when a Hollywood film company comes to Duluth to make a movie. Jonathan is less happy than most of the locals, because it’s a fictionalized dramatization of one of his own cases. He is being played by Dean Casperson, one of Hollywood’s major players, but the whole business makes him uncomfortable.

Then a man dies in a freak collision with a deer on a snow-covered highway. His ID turns out to be bogus, and a gun is found in the car. Shortly after that, a local college girl who hung around with the movie people is reported missing. Putting two and two together, the police start searching the area near the auto accident, and sure enough – the young woman’s body is found in the snow, a bullet in her head.

And then she turns out to have been using an assumed identity too.

It’s all confusing, and it’s not about to get simpler. On top of the murder mystery, there are questions about certain behaviors on the movie set, behaviors no one will talk to the police about. Stride and his co-workers (along with author Freeman’s other series character, Florida PI Cab Bolton, who shows up for his own reasons) will have to move fast and smart to prevent very ugly history from repeating itself, not on film but in real life.

As stipulated above, I find Brian Freeman a good writer, and I can find no fault with his storytelling. I’m not sure why his books leave me kind of cold, except for a certain political correctness I sense in their construction. Most of the cops in this story are women, and they’re all beautiful. I don’t know for sure, but I’d wager that is not a statistically accurate portrayal of the Duluth police department.

Ah, but I’m probably just jaundiced. I note that my review of the previous Jonathan Stride book complained about excessively explicit sex scenes. I’m happy to report he seems to have toned that down.

I might even read another book in the series – if I can borrow it from the library. 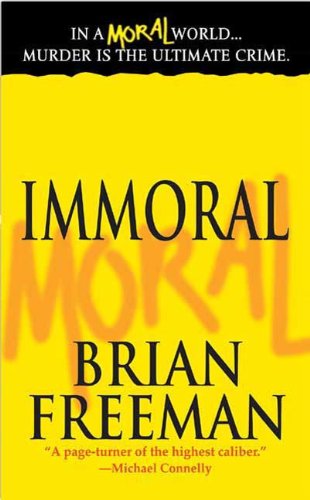 Brian Freeman is a new novelist to me, and I almost loved his novel, Immoral. Almost.

The hero of Immoral, police Lt. Jonathan Stride, works in Duluth, Minnesota. Fourteen months ago, a local teenaged girl disappeared, leaving no trace. That’s not impossible in a place surrounded by the north woods, but it’s frustrating for Jonathan – and unbearable for her parents – that the crime hasn’t been solved. Now another young girl has gone missing – Rachel Deese. Rachel was the most beautiful girl in the local high school – seductive, promiscuous, manipulative. Was she murdered – perhaps by the predator who (probably) murdered the first girl? Or did she disappear on her own initiative? But if that’s true, she sure did an expert job of framing her stepfather for murder before lighting out for the territories.

In the course of his investigation, which will take three years to wrap up, Jonathan will puzzle over Rachel’s parents’ bizarre relationship, probe the broken hearts she left behind, meet a woman he wants to marry, travel to Las Vegas, and then meet a woman he wants to marry more. The final truth, once discovered, will be extremely complex and morally mystifying. The final judgment on Rachel – and on Jonathan – will be difficult to make.

I liked the writing in Immoral. I liked the characters too. Brian Freeman is a good writer – with one jarring exception. He takes the sex scenes way too far (in my opinion), making bedroom behavior unnecessarily explicit. There’s also a hypocritical pastor, but – oddly – the author doesn’t seem particularly outraged by the hypocrisy. Also he pushes the modern view of marriage, which holds that it is not legitimate unless there’s romantic passion. This, in my view, justifies a lot of cruelty and betrayal.

I’m not sure what to say about Immoral in the end. I found the conclusion problematic, but understandable. I’d almost be eager to read more of Freeman’s work, but the combination of near-pornographic sections, the questionable resolution, and the handling of marriage put me off a little. You might like it better than I do. There are a lot worse books out there.