Caimh McDonnell’s series of comic Irish mysteries, most featuring big, drunken detective Bunny McGarry, has been one of the delights of my recent reading life. Bloody Christmas, which fits into the series, is a special edition novella, available only until Christmas. Its sales support an Irish charity for the homeless.

Bloody Christmas is set way back near the start, just after the end of A Man With One of Those Faces. Bunny has been undergoing psychological evaluation after throwing a senior officer off a building, something he finds annoying and unreasonable. But now he’s managed to get his sanity officially verified, and is celebrating in his favorite pub, when a man tries to assassinate him in the men’s room.

Instead of beating the man bloody, however, Bunny listens to his tale of woe. The man (who’s there with his pregnant wife, named Mary [very subtle]), is the victim of criminals who’ve kidnapped their son. Well, it’s Christmas, a time for good works. Bunny has a few ideas on how to find the boy, and he puts a plan into motion.

It’s all completely implausible, and completely hilarious. Bunny is at his profane, selectively brutal best, and I laughed out loud more than once as he cuts a swathe through the underworld he understands so well. I hope it’s not too much of a spoiler to tell you that it all turns out more perfectly than anything has a right to in this naughty world.

Highly recommended, with cautions for adult themes and profanity.

He had always been a deceptively good athlete, in the sense that, to look at him, you wouldn’t have thought he was any kind of an athlete at all.

Bless me Father, I loved this book. Loved it to death. I’ve enjoyed all Caimh McDonnell’s novels, but this one was a special delight.

If you haven’t been following the series, fat old drunken Bunny McGarry, former Dublin policeman, is thought by his Irish friends to be dead. He is not. Instead, he’s in the United States on a personal mission. The love of his life is living in hiding, protected by a shadowy, renegade order of nuns called the Sisters of the Saint. He needs to contact her and warn her about something. As I Have Sinned begins, he has learned the name of a man who might be able to put him in touch with those women. But that’s another challenge. The man is Father Gabriel de Marcos, a priest in a New York ghetto neighborhood. Father Gabriel has no time for Irishmen on missions – he’s trying to save a few of the kids in his flock from the trap of gangster life – a girl who can box, a boy who can paint, a young man with a gift for words.

But Bunny stubbornly insists on sticking around until Father Gabriel can help him. Bunny can even help with coaching the kids in the church gym. Reluctantly, Father Gabriel lets him move in as a type of assistant priest –a tough gig for Bunny, devoted as he is to getting drunk and cursing. Gang leaders are threatening Father Gabriel, accusing him of stealing “their” people. But the priest insists he has no need of Bunny’s  protection.

And it’s almost true. Father Gabriel has secrets, and a history. A history that’s catching up with him.

It all comes together in a farcical explosion of improbable action, slapstick, and genuine heroism and grace.

What I loved most about I Have Sinned was that along with exciting fights and witty writing, there was genuine goodness and sweetness here. Father Gabriel is a tremendous hero, a sincere man of God, loving his neighbor and struggling to redeem his past (I could quibble that he has a poor understanding of grace, but what do you expect from a Catholic?). I was charmed even while I laughed. You’d have to go far to find a more positive portrayal of a man of God in any novel.

Nevertheless, you need to be prepared for lots of foul language. But other than that, I highly recommend I Have Sinned. You’ll probably want to read the rest of the books first, though. 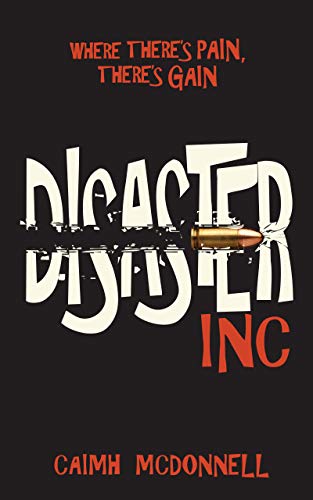 Still, the Victory had a colourful history, even by the standards of New York, where any hotel worthy of the name collects incidents of infamy just by existing in the city that doesn’t sleep – or if it does, it sleeps with someone else’s partner.

Caimh McDonnell’s Dublin Trilogy series has come completely loose from its moorings. The trilogy is done, but the characters continue in further adventures, and I’m perfectly fine with that. Because they’re so much fun.

In Disaster Inc., the first book of a new series, we are reunited with big, bibulous Bunny McGarry, former Dublin policeman. Officially he’s dead and buried, but in fact he’s been transported to the United States by a shadowy group possibly connected to the CIA. They’ve equipped him with a debit card and an indestructible cell phone, to facilitate his search for the love of his life. She’s a jazz singer named Simone, and has lived her life on the run from other shadowy agents, because she “knows too much.”

Unfortunately for Bunny, as the book starts he’s eating an unsatisfactory breakfast in a roadside diner, having been robbed of his rucksack, which contained the card and the phone, during a drunken binge. As he’s pondering his next move a pair of masked gunmen invade the diner, announcing that this is a robbery. Bunny immediately identifies them as amateurs, and neutralizes them. Then he beelines for the door, because he’s in the US illegally and he’d rather not explain himself to the police.

But a car pulls up in front of him on the highway. Inside is a woman who was also in the diner. The robbers, she says, were actually there to kill her. She, too, “knows too much.” If Bunny can come to New York and help her get out of her problem, she’ll pay him a lot of money. After some hesitation, Bunny accepts, figuring he can find whoever stole his rucksack at the same time.

Which kicks off a highly improbable, but extremely enjoyable, adventure. McDonnell’s trademark wit is well in evidence, though I found a couple editorial errors – a wrong word choice and a confusion of attributions in a stretch of dialogue.

But still it was a lot of fun, and I recommend it – if you can handle the obscenities.