Grim’s Hall is one of my never-miss blogs. Today Douglas posted an excellent little video based on Lewis’ essay, “The Necessity of Chivalry.” It’s one of my favorites of his pieces, and I never saw it until it appeared in Present Concerns, about the last Lewis collection to be published with new material:

Theophilus Van Kannel, a Philadelphia-based inventor, hated holding doors open for people, especially wildly good-looking people, and so he gave us the revolving door. People talk about the airflow goodness for large lobbies with revolving doors, but we know what Van Kannel was thinking. 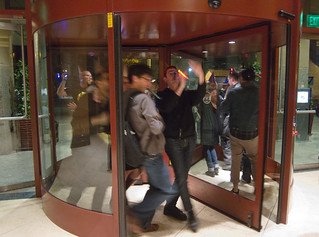 And on that topic, Sabrina Schaeffer explains, “If You Want Sameness, Don’t Expect Chivalry.”

“Well, our brave new world of gender equality—in which we scoff at gender differences and men and women are encouraged to act the same—often proves harmful to women and girls. While the modern feminist movement won women tremendous freedoms educationally, professionally, personally, and sexually, it often leaves women feeling anything but empowered.”