This bit, called “The Funniest Sketch in the History of Sketch Comedy” by our friend Anthony Sacramone, is not a bit that could fly in our current day of keeping our distance and staying home to avoid infection. Happier days. Enjoy!

Micah Mattix praises Randy Boyagoda’s Original Prin as a terrifically funny religious satire. In it a small liberal arts college, newly named University of the Family Universal, needs more money to keep treading water, so a specialist is hired to uncover their options. She offers them two options: “sell UFU’s buildings to a Chinese developer to transform into an assisted living care facility where the professors would provide ‘stress free’ workshops to residents, or take money from the university-less country of Dragomans in exchange for providing online classes and degrees to its citizens.”

Someone will have to ferret out these options to see which one is better. Enter our hero, Professor Prin, who specializes in seahorses in Canadian literature.

Read Mattix’s review for better feel for the comedy what looks like good and proper skewering of some of our institutions.

Witness comic genius in these two skits about the epic Yale athlete Scott Sterling and his ability to block the ball. The first video featuring soccer penalty kicks came out in 2014 (though before this weekend I thought it was much older than that). It’s one of the funniest videos of the decades, only made better by the follow-up volleyball video released in 2016. The execution and pacing of these videos sells the comedy marvelously.

Like the man said, when Armageddon comes I want to be in a bunker made of that man’s face.

The Bollinger Everyman Wodehouse Prize is the United Kingdom’s only literary award for comic writing. Last year, it went to Bridget Jones’s Baby by Helen Fielding.  Two works tied for the prize in 2016, The Mark and the Void by Paul Murray and The Improbability of Love by Hannah Rothschild. I believe we mentioned these works and the Alexander McCall Smith’s 2015 win earlier in this space.

But the 62 novels submitted for consideration this year were only funny enough to produce “many a wry smile,” not the “unanimous, abundant laughter” the judges were hoping to have.

Judge and publisher David Campbell said, “We look forward to awarding a larger rollover prize next year to a hilariously funny book.”

“There were a lot of witty submissions, bloody good novels, but they weren’t comic novels. The alchemy was not there.” (via Prufrock News)

It’s a common sci-fi truism that the guy wearing a red shirt on a new away team mission will be killed. Of the original Star Trek series, Wikipedia reports, “59 crew members killed in the series,” of which “43 (73%) were wearing red shirts.” John Scalzi asks, what if those were actual lives in a galaxy far, far away?

In his comic novel, Redshirts, Scalzi spins the tale of several minor crewmen on the Universal Union flagship Intrepid who start to ask why their teammates act strangely when senior officers are looking for away team members. One guy who has hidden himself in the bowels of the ship has a crazy theory, but when none of the sane theories pan out, you go with the crazy one.

It’s a funny book, but I didn’t start laughing until at least halfway through it, and the ending parts stretched my patience almost to the point of putting it down unfinished. There’s a point when that weird joke has been explained enough and going over it again will just kill it. Unfortunately, this joke gets run over a dozen times. But there are sweet moments in those ending parts that may be worth reading, if you’re into that sort of thing. Heh.

The short list for this year’s Bollinger Everyman Wodehouse Prize for Comic Fiction has been released. The winner of this UK literary award  will be announced next month, just prior to the Hay Festival in Wales.  The winner “will receive a jeroboam of Bollinger Special Cuvée, a case of Bollinger La Grande Année and the complete set of the Everyman Wodehouse collection. They will also be presented with a locally-bred Gloucestershire Old Spot pig, which will be named after the winning novel.”

Last year’s prize went to two authors, Hannah Rothschild for The Improbability of Love and Paul Murray for The Mark and the Void. In 2015, Alexander McCall Smith won the prize for Fatty O’Leary’s Dinner Party. (See this article for a photo of the prize pig.)

“It was impossible to separate these two books, because they made us laugh so much. And between them they produce a surfeit of wild satire and piercing humour about the subject that can always make us laugh and cry. Money,” judge and broadcaster James Naughtie told The Guardian.

Comedian Irwin Corey, who regularly lampooned the educated classes, died this week at age 102. The NY Times tells a story of how he impersonated author Thomas Pynchon to receive the National Book Award for fiction in 1974.

No one in the crowd had any idea what the reclusive Mr. Pynchon looked like, and when Mr. Corey arrived to accept the award for him (the novelist had approved the stunt), many people thought they were getting their first look at Mr. Pynchon.

They soon learned otherwise. Beginning his remarks, as he often did, “However,” Mr. Corey referred to the author as “Richard Python” and said, “Today we must all be aware that protocol takes precedence over procedure.” He continued: “Marx, Groucho Marx, once said that religion is the opiate of the people. I say that when religion outlives its usefulness, then opium will be the opiate. Ah, that’s not a bad idea.”

The Times reported the next morning that Mr. Corey’s “series of bad jokes and mangled syntax” left “some people roaring with laughter and others perplexed.”

See Corey and hear his acceptance speech from the National Book Awards here. 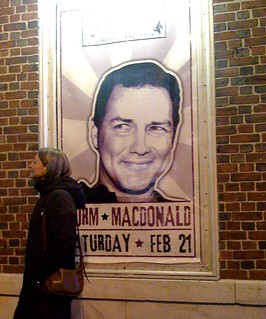 Hans Fiene works through the mechanics of an elementary book review on comic Norm MacDonald’s new book, Based On a True Story: A Memoir, which he says is a bit of a challenge.

Don’t get me wrong, Macdonald’s first foray into the literary realm has many book-like features. It has pages with words on them. It has a dust jacket with the title on the front and endorsements on the back. It generally abides by the rules of English grammar . . .  But in substance Based on a True Story is not a book.

Despite being labeled “a memoir,” Macdonald has no interest in writing a genuine account of his life’s events or allowing the reader to get near him. Rather, he’s firmly committed to amusing himself by irritating you into fits of guffaws.

Ted Kluck has written and collaborated on a number of books, but his name isn’t on the book I heard him recommend last month and consequently purchased. That book comes from Ted’s media empire, Gut Check Press. It’s re:raptured by Committee. Exactly who wrote it is being withheld, no doubt pending Congressional subpoena, but I think Ted had a hand in it. Maybe even a foot.

The story begins with a young Episcopal priest getting his lights dashed by Tim Van Shrimpy, “Bible Scholar.” The reason Van Shrimpy is rampaging around beating up people is still unclear to me, but realism was sold out when this tale was typed up. Ted Strongbow is a football superstar with few real skills (wait, is this part straight-up parody of actual people?). Rev. Lewis Ironsides has written the book Exactly How to Look and Exactly What to Say If You Want to Marry My Daughter Carol-Anne, which, he says, isn’t exactly arranging her marriage, but it’s a hot item among controlling homeschool moms with eligible sons.

It takes place in a world that has The Honorable Philip Yancey Hospital housed within the Dynex/Lifeway/Excellence in Christian Publishing Kilometer High Stadium, home to the Denver Values football team (Strongbow’s team). The story takes up a whole handful of characters in short, often choppy, scenes that flow together just like the end-times thrillers it intends to skewer. What is bringing all these people together? Their loyalty of dispensational end-times teaching and the belief that they need to be in place before the rapture occurs. But are they mobilizing to be in place to usher in or ward off the rapture? END_OF_DOCUMENT_TOKEN_TO_BE_REPLACED 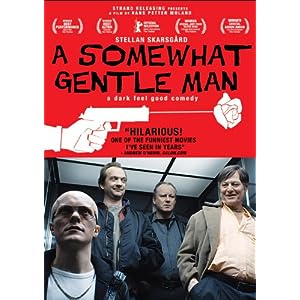 What do you do when you’re recovering at home from a medical test, still under the influence of a mild sedative, and have stupidly left your Kindle at the office?

If you’re me (which is admittedly doubtful) you go to Netflix and stream a Norwegian movie you’ve heard interesting things about. That movie was A Somewhat Gentle Man, directed by Hans Petter Moland and starring Swedish actor Stellan Starsgård (in a marvelously underacted performance).

Titled En Ganske Snill Mann in Norwegian (I’d have translated it A Rather Nice Man myself, but this translation is good), A Somewhat Gentle Man was marketed as a “hilarious” comedy according to the DVD box. I think it’s more of a quirky, updated Noir, including large doses of black humor. Instead of the angular shadows of classic Noir, this is a Film Gris. The whole world of Ulrik, the film’s antihero, is gray, from the gray Norwegian winter sky, to the gray concrete buildings of Oslo’s seedier side, to the gray basement room he rents (almost indistinguishable from the prison cell from which he’s just been released) to his gray clothing and gray hair. Occasional flashes of color, especially red, compel the eye and signal moments of hope in his life.

Freshly released after 12 years’ incarceration for murder, Ulrik quickly reunites with his old underworld buddies. But he’s not eager to go along with their plan for him, which primarily involves his killing the man whose testimony got him convicted. Basically he wants a quiet life, to work as a mechanic and avoid confrontations (he’s almost quintessentially Norwegian in this). Most of all he wants to reconnect with his son, who is now living with a pregnant girlfriend who has no wish to have a felon grandfather involved in her coming child’s life.

As is expected in such stories, sex is a complicating issue. Ulrik’s sexual encounters are relatively explicit, and possibly the least titillating you’ll ever see on film. The whole movie has a gritty, realistic look. The women generally aren’t very beautiful, and Ulrik’s participation is as often as not merely dutiful, to avoid giving offense. His old and ugly landlady acts as if she’s doing him a favor. He’s more enthusiastic about coupling with the secretary at the garage, from whom he’s been warned off by the owner (who speaks only in paragraphs, and very fast).

In all these relations Ulrik takes a passive role, until his refusal to murder the “snitch” for his gangster buddies forces him to take personal initiative, which—not surprising in a modern film—brings about what we’re meant to regard as a happy resolution. I share James Bowman of The American Spectator‘s skepticism about the moral congruity of the ending.

Do I recommend the movie? Not generally. Certainly not to younger viewers, or to anyone offended by foul language, nudity and sex scenes (especially unappealing nudity and sex), or violence. Still, if you care for this sort of thing, and are interesting in seeing a quirky take on classic themes, A Somewhat Gentle Man contains much of interest.