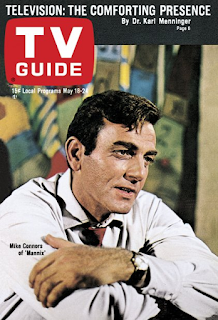 Dave Lull has done it again. He found an anecdote about D. Keith Mano in a posting at It’s About TV. The author, Mitchell D. Hadley, recaps an issue of TV Guide from May 18, 1967 (I was about to finish my junior year in high school that week, but we didn’t take TV Guide). Mano isn’t featured in the magazine, but Hadley has a recollection:

It reminds me of a story told by the novelist D. Keith Mano, who was teaching a creative writing class and slogging through some dreadful efforts by earnest would-be writers. When one, complaining about his low grade, protested, “But this is how it was,” Mano replied, “Yes, and make sure it doesn’t happen again.” And that’s why Joe Mannix’s life is more interesting than yours, Mister Private Detective.

We watched Mannix at our house, but I was never a big fan. I remember that he seemed to get knocked unconscious roughly once a week. I was no neurologist even then, but I was pretty sure you’d be drooling in a nursing care facility if that happened in real life.

For Good Friday (via Dave Lull) a meditation from National Review on Holy Week by the late D. Keith Mano:

Again, I think not. God prefers, when He can, to conserve terrestrial order. He has a dramatic instinct. And His own peculiar unities. The Passion is as naturalistic as frail wrist tissue shredded by a spike. Jesus could ferment water. He could infinitely divide the loaf and the fish. But here He had need of a furnished apartment. His colt might have come about providentially, as Abraham’s ram came about, caught in some thicket. But God wanted a known colt: one that had memorable references in Jerusalem. It was His purpose to leave a clear and historical track behind — evidence that might stand up in court. The presence of transcendent power among modest instruments is more persuasive than any bullying miracle could be.

Dave Lull sent me a link to this recent Boston Globe column by Jeff Jacoby. It includes a section on the Oxford comma debate, in which he cites the late D. Keith Mano:

The story reminded me of one of those great exchanges that for years made William F. Buckley’s “Notes & Asides” — the column in which he regularly reproduced his exchanges with colleagues, readers, and other correspondents — the best part of National Review. From December 1972:

Among the responses was this lament from D. Keith Mano, a National Review columnist, to the magazine’s managing editor, Buckley’s sister Priscilla:

“I have read with dismay WFB’s ukase on the serial comma. I can’t do it. No way. It’s just plain ugly. WFB says this is un-negotiable. . . . How serious is he? Can I arrange a dispensation?

“Look: I’ll compromise. There should be peace in the family. Instead of “John went to the store and bought some apples, oranges, and bananas” — how about if he just buys oranges and bananas? Or a head of non-union lettuce. You see what this sort of restriction leads to. And they ask me why fiction is dying. Erich Segal, I bet, uses the serial comma.

“You may tell WFB that, from now on and as ordered, I salute the red and white.”

I’m frankly a little disappointed — I’ve been won over to the Oxford comma side, myself. I have the idea the Forces of History are in its favor. Perhaps that was Mano’s fate, to be a genius forever tainted by his associations with questionable movements. Playboy Magazine. Dropping the Oxford.

Of course, my advocacy of the O.C. probably dooms it…

The old US post office, custom house, and court house in St. Paul, built in 1902 and home to much graft and corruption in its time, is now called Landmark Center. They’re a little more tolerant of architectural treasures in that city than in Minneapolis, so it was saved from the wrecking ball and now exists as a cultural center. Once a month they host events for various ethnic groups. This month (yesterday) it was the Danes, and we Vikings were asked to man a table for the event. Three of us showed up. We had a pretty good time.

Lots of visitors, and lots of questions, many from children, which is always nice. I was able to explain how people got the idea that Viking helmets had horns, and how chain mail was made. Sold a couple books and several bits of leather work.

One of the best parts was that we were right next to the aebelskiver stand. Aebelskivers are Danish pancakes, formed by secret and occult methods into spheres. They’re generally served with powdered sugar and strawberry preserves. Delightful.

I also had the pleasure, over the weekend, of receiving another tip from Dave Lull. He remembered that I’m fond of the late D. Keith Mano, and he alerted me to a reprint of one of Mano’s old columns over at the National Review. They’re going to be publishing a series of them over the next few weeks. This one concerns a series of visions of the Virgin Mary in Bayside, Queens, New York back in 1975. Mano describes his “investigation” in bemused and gentle terms.

The church of St. Robert Bellarmine—now half school, half gym—stands two blocks up. There used to be a statue on the corner: large copy of those Virgins in telephone booths that wait outside Catholic houses. Veronica had her first visions here. But, as crowds grew, an unsympathetic Mother Church had the statue sledgehammered away. So much for mariolatry. You can still see the pedestal stump, cordoned off by wooden snow fencing.

It occurred to me to do a web search on Dave Lull. Turns out he’s not merely a reader of this blog, which would be enough to adorn the fame of any man. He’s a librarian (thus one of nature’s noblemen) and a facilitator of blogs. Blogless himself, he sends tips like this to a number of book bloggers.

I am honored to be among that number.

The death of D. Keith Mano continues to sadden me. I think it’s because he was a Christian author (of a sort) who produced truly excellent literature; stuff that ought to be remembered. But I’m not sure it will. To some extent that is his own fault; he was very much the product of a weird time in American history. He may be rediscovered by future generations, or he may be lost track of entirely.

He had a set of rules for writing, which he never fully explained to me; the point was to avoid similar constructions in adjacent sentences. He did explain his rules for reading: He pulled books blindly from a bag. One source for the bag was the Strand, the great used-book store below Union Square. Keith would visit it with a pair of dice; the first throw picked the aisle, the second the shelf, the third the order in from the end of the book he would buy. You must have got some odd ones, I said. An Indian fiveyear plan from 1959, he answered. You read the whole thing? I asked. There were lots of charts, he said.

Our friend Dave Lull sent me this link to the .pdf of the whole issue. The Brookhiser eulogy is on page 24. I hope this is legal.

And, picking up on the bad news from the previous post, I got news yesterday of the death of one of my literary heroes, the novelist D. Keith Mano.

In a review of the novel for The New York Times, John Leonard wrote: “It is as if James Joyce, for his sins, had been forced to grow up in Queens; as if Sam Beckett had been mugged by Godot in a Flushing comfort station; as if Sid Caesar played the part of Moby-Dick in a Roman Polanski movie shot underwater in Long Island City; as if Martin Heidegger had gone into vaudeville and … never mind. Just boggle.”

Mano was amazing, a Christian author who’d never be allowed within a hundred yards of the Christian Booksellers Association. He wrote about sex for Christians, and about Christianity for Playboy. Although he opposed women’s ordination in the Episcopal Church, his novel Take Five features a sympathetic woman pastor.

His first novel, Bishop’s Progress, is probably my favorite of his works (I haven’t read them all). It’s the story of a liberal bishop, author of a popular book “reinterpreting Christianity for the modern man.” Confined in a hospital room with an ordinary working guy, he gradually realizes that what he preaches is of no use whatever to this genuine human being (a species with which he has little experience). It’s a great moment when he tells the fellow, “Don’t buy my book!”

Unlike my friend Steve, Mr. Mano had a hard death. Rest in peace.

(Thanks to Dave Lull for the information.)