In the bonus material on the back pages of Justice, author Jim Krueger praises Bob McKee and his story seminar for teaching him this pivotal idea: every good villain must believe himself to be the hero of his story.

You can see that idea played out best in my description of Luthor’s motives. He wanted to raise up a new, stronger humanity that didn’t lean on the crutches of overpowered non-humans like Superman and the Martian Manhunter. He’s still a villain because of the path he’s willing to take to get there, but you can see how calling him a hero of his own story could work.

Wilson Fisk (Kingpin) in the Daredevil series would easily fit here too. He spoke of remaking the city into a better, safer neighborhood. But he also knew what goodness and moral truth were, at least, something of them. In this clip, which is one of the best of the season, he talks through his thinking process probably for dramatic effect, not from a fit of honesty.

Krueger says good villains don’t roll out of bed wondering what new terrors they can unleash, except some of them do. Some men just want to watch the world burn, as Alfred in another story put it, and even Krueger’s story demonstrates that

In Justice, dozens of villains collaborate on a single, grand cause because they are being manipulated by their leaders. I won’t tell you how to avoid the spoiler, but they do not share a distorted view of some common good that has pressed them to put aside differences. Their only good is their own profit, power, or pleasure. Their leader is using them to wage war for as long as he can until he disposed of them. Nothing about that can be called good.

Heroism is about saving people. In the New Avengers series I’m reading now, their compulsion to save people is almost a weakness. They will not let go of the possibility that they could defeat what at the moment appears to be indefeatable. They must try while they still can. Villains think about using people and saving themselves, which isn’t good just as abuse of all types is heroic.

Macbeth may be the hero of his story. Hamlet is. Many others just want the thrill of dropping the match that sets the world aflame.

Our friend Loren Eaton at I Saw Lightning Fall exegetes the ways the Daredevil series improves its storytelling by getting the real world wrong:

Here’s the interesting thing, though: While all these examples might falter on the ground of plausibility, they do yeoman’s work in developing both characters and plots, in advancing scenarios and revealing personal peculiarities. When Kingpin calls Vanessa on the carpet for concealed carry, viewers learn that she’s not some ingénue, but rather an empowered woman with her own ambitions: “We’ve been sitting here talking for hours, and you’re going to insult me like I have no idea what you really do? … I know you’re a dangerous man. That’s why I brought a gun to a dinner date.”

Read it all here.

The second season of Netflix’s “Daredevil” was released today. Aaron Earls of “The Wardrobe Door” talks about the themes of the series.

“Nothing drives people to the church faster than the thought of the Devil snapping at their heels. Maybe that was God’s plan all along,” Father Lantom, Matt Murdock’s priest, says, “why he created him, allowed him to fall from grace to become a symbol to be feared, warning us all to tread the path of the righteous.”

Netflix’s “Daredevil” confronts the problem of evil in the world and challenges viewers to consider how they can be part of the solution. And it does it through the life of a blind Catholic superhero. . . .

When wrestling with the problem of evil, “Daredevil” gives an answer that may not address all of the philosophical wonderings, but addresses a much more practical issue. We see evil in the world and we wonder what God is doing about it. As those created in His image, we have to once again look in the mirror. “Daredevil” reminds us that God is there in the midst of the suffering, able to serve, because we are there.

I’m looking forward to this season. One image from the first season that sticks with me is that while the hero takes up the metaphor of the devil, the villain sees himself as a savior, at least until the very end when he spins another metaphor for himself. Unlike Jessica Jones, Daredevil wants to team up with God in this fight. 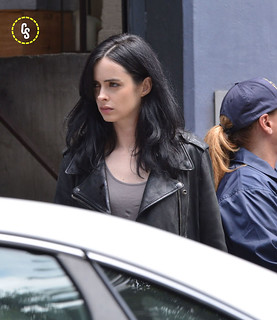 “Jessica Jones” is not the story of a moral crusader. It’s the story of a survivor of emotional and sexual abuse. Granted, she’s a unique survivor of a unique type of abuse. Jessica (portrayed by Kristen Ritter) has super strength, endurance, and the ability to fly—brought on through a chemical exposure a bit like the first step Matt Murdock (Daredevil) took in his origin story. Her abuser is not only a master manipulator, like at least two other characters in the show, but a man who can control people’s minds for several hours at a time.  END_OF_DOCUMENT_TOKEN_TO_BE_REPLACED