We don’t plant a backyard garden every year and have grown a good crop only two or three times. You may have had more zucchini than you could eat time and again, but we’ve only begun to approach that level once. Usually our squash grows leaves and flowers but no fruit. Once I grew some nice turnip greens; at least the first batch was nice. The second was to bitter. I put only tomatoes and basil out this year, because I didn’t get around to clearing the other bed and trying beans.

Gracy Olmstead has a good piece on feasting, the church calendar, and seasonal eating, noting the self-control and humility it takes to live closer to the land around you.

Don’t get me wrong: we’re incredibly fortunate to get avocados and bananas year-round, and to have refrigerators and freezers in our houses. But I think we’ve also lost some of the joy of food, the ability to treasure the flavors of the seasons, because we no longer understand these patterns of waiting and feasting.

This concern became especially real for me two summers ago, after my husband and I moved to the Virginia countryside. As we were unpacking our books and clothes, I transplanted our fledgling tomato plants into a garden plot the previous homeowners had left behind. Those plants seemed to shoot upward overnight, spreading with fervent glee. . . .

Soon we were picking giant bowls full of tomatoes every day, and the toddler and dog would sit next to each other in the garden and eat them to their hearts’ content. 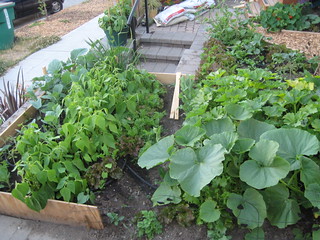 Pete Peterson shares some thoughts he learned from Norman Wirzba on a theology of eating. A gardener with many animals, Peterson asks, “If we are the Body of Christ, are we not also called to be gardeners and caretakers of the New Creation?”

Each morning when I wake, I am the celebrant in a liturgy that leads me through the sacrament of Creation. I process through garden aisles. I pastor the beans, and the grape vines, and the apple trees, and, yes, even the chickens and ducks. They sing praises in crows and quacks. They make offerings of eggs, or fruit, or even simple beauty. They come forward to partake of the food I offer, and I leave them with a blessing.