The refugee issue is one that perplexes me. I recognize the Christian duty of hospitality, and the Old Testament injunction to welcome the stranger and the sojourner.

But I’m not entirely sure the biblical situation is exactly analogous to our own. I’m not sure the Lord intended the Israelites to go out and bring in thousands upon thousands of Amalekites. And I’m pretty sure He never meant the welcome to expand to the point it has in Europe, where the strangers and sojourners are inexorably replacing the indigenous people.

I could be wrong, of course.

But what really surprises me is the liberal Christians I see on Facebook, who post Old Testament verses in support of their position.

These are the same people who, for decades now, have been telling me that if I appeal to the Old Testament on any moral issue, I’m rationally obligated to stone people to death for wearing blended fabrics.

Have they noticed that they’ve just demolished 75 percent of their religious argument for homosexual marriage?

“When I started to realize that I was attracted to Yoko as more than just a friend, I freaked out. Seriously.”

This is how Kevin Frye begins his frank story of the first year or two of his marriage on a new website focused on helping and connecting Christians who resist the pull into same-sex attraction. The founders of Your Other Brothers say:

Beyond our fellow same-sex attracted believers, we also share our stories for our heterosexual brothers and sisters. We are here to say that this “issue” of homosexuality exists as people here in your midst, and like anyone else in your pews, we are yearning to be heard, known, and loved.

We never chose our sexuality, but we aren’t content to pursue it either. We are locking arms with each other in the belief that our Father has something better intended for His children.

Frye’s story is a hopeful one, but not one that spells out how all of the pain is behind him. It’s the kind of raw testimony I hope every church family has provided a place for, stories of current addiction, recent failure, and dimming hope for recovery. In present-day America, this feels radical, but our society has been sex-crazed for years now. We can’t wish away ugly subjects like pervasive racism, the idolatry of wealth, and homosexuality. We must face them in the beautiful light of the gospel.

That doesn’t make me happy.

The reasons for my disapproval of the groups are beside the point at a time like this. People are grieving. Real human beings have lost their lives, or been crippled or maimed for life. To talk doctrine just now would be un-Christlike.

But I’m angry nonetheless. I’m angry because further lives have been lost to the worthless, statist institution of the Gun Free Zone.

Orlando isn’t a case of equal and opposite evils. The moment any person takes it upon himself to murder defenseless people, he automatically becomes the Greater Evil. Decent people will all side against him. I hope.

Some of my Facebook friends have been posting graphics supporting a group called “Pink Pistols.” Its purpose, I gather, is to encourage members of the homosexual community to take responsibility for their own safety through arming themselves.

That’s one “gay” initiative I can support wholeheartedly.

I take it as a given that one of the threats this group was originally organized to counter was the threat of people like me. Conservative Christians. Well, you know what? If some conservative “Christian” actually decides he’s got special license from God to murder people because he disapproves of their sins, he deserves the pink bullet he’ll get for it. Let him explain to Jesus how he justifies flouting the greatest commandment for the sake of a lesser commandment.

Meanwhile, may God have mercy.

I offer the song above, dredged from my college years, as documentary evidence of the facts I’m about to tell you. Because you won’t hear about this much of anywhere else. This is Lost History, things that happened but are now officially non-things, like Stalin’s old revolutionary comrades and Hillary Clinton’s emails.

“A piece of paper.” “Just a piece of paper.” It’s a phrase I first recall encountering in an article about an actress in a magazine (Life, perhaps), back when I was a kid. “Why haven’t we gotten married?” she replied to a question about her love life. “What’s a marriage license? Just a vulgar piece of paper.”

I’m sure she wasn’t the first to put it that way, but after that I noticed that I encountered it again and again. Actors said it. Writers. Rock musicians. Poets. Intellectuals. “What’s a marriage license? Just a vulgar piece of paper. What does such an object have to do with real love?”

This form of expression stopped appearing, I think, sometime in the 1980s. It’s clear now what happened. The Big Heads of the left realized that the promotion of homosexual marriage would be a splendid hammer with which to bash traditional Christian sexual morality.

And suddenly the cry was no longer, “It’s just a piece of paper!” but “It’s the Most Important Piece of Paper in the universe! Anyone prevented from having this wonderful, transcendent piece of paper has been denied their deepest human right!”

This sudden dialectical U-turn was not accompanied by any admission that they might have been wrong in their old position. No, the old slogan just went down the memory hole, along with Pres. Obama’s college records and Che Guevara’s murders. “Oceania has always been at war with Eastasia, and progressives have always revered marriage.”

Because it’s all about the political narrative. And the narrative runs in whatever channel will best serve the Cause.

Tim Keller reviews two books that argue in favor of Christians accepting homosexuality, saying the books by Vines and Wilson are the ones he is most often asked about. Not wanting to dismiss the books as simply unbiblical and open himself to the accusation of flippantly ignoring the subject, he writes over 2,500 words on what the authors profess and how they are wrong. On the issue of secularism, which we’ve discussed many times on this blog, Keller observes:

More explicit in Wilson’s volume than Vines’ is the common argument that history is moving toward greater freedom and equality for individuals, and so refusing to accept same-sex relationships is a futile attempt to stop inevitable historical development. Wilson says that the “complex forces” of history showed Christians that they were wrong about slavery and something like that is happening now with homosexuality. 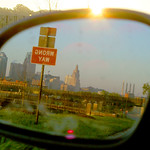 Charles Taylor, however, explains how this idea of inevitable historical progress developed out of the Enlightenment optimism about human nature and reason. It is another place where these writers seem to uncritically adopt background understandings that are foreign to the Bible. If we believe in the Bible’s authority, then shifts in public opinion should not matter. The Christian faith will always be offensive to every culture at some points.

And besides, if you read Eric Kaufmann’s Shall the Religious Inherit the Earth? (2010) and follow the latest demographic research, you will know that the world is not inevitably becoming more secular. The percentage of the world’s population that are non-religious, and that put emphasis on individuals determining their own moral values, is shrinking. The more conservative religious faiths are growing very fast. No one studying these trends believes that history is moving in the direction of more secular societies.