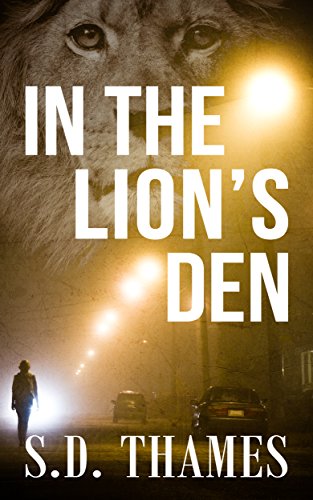 “I know that having a woman like that, it don’t do nothing for a man’s soul. If a man’s evil inside, no woman in the world’s gonna change that. Once that evil gets its hooks in you, you’re done. You ain’t ever gonna get them out.”

Having enjoyed S.D. Thames’ novel, A Mighty Fortress, as I did, I bought his earlier novella, In the Lion’s Den, as well. It’s a very good read, with definite similarities to AMF, though in less developed form, which you can’t help in a novella.

Danny Grey did a stretch in prison for felony murder. Now he’s out on parole, living in the Bronx, keeping his nose clean. He works in a pizza joint and saves his money. Four more months and he’s a free man. He plans to move to Florida and open his own pizza place. Legit all the way from now on.

Then he comes up against his old boss, the gangster he used to hurt people for in his old life. The boss blackmails him into working for him again, driving prostitutes around at night. That’s how he meets Veronika, a gorgeous Russian woman his boss treats as property. Gradually Danny falls for her, and then he faces a choice – he can escape from this trap on his own, or he can try to figure out a way to rescue Veronika. His decision will call for real courage and real sacrifice.

In the Lion’s Den is a cleanly written story that will draw you in. There are many similarities to A Mighty Fortress – Dan is a lot like Milo Porter, the hero of that book. But the religious elements are more subtextual here. For some that will be a reason to prefer this one.

I liked In the Lion’s Den very much, and I recommend it highly. Cautions for raw language and adult stuff.