While still I may, I write for you
The love I lived, the dream I knew.
From our birthday, until we die,
Is but the winking of an eye

W.B. Yeats wrote fondly of his native Ireland and the pagan faerie roots he supposed it has. These lines from his poem, “To Ireland in the Coming Times,” published in 1893. Composer Thomas LaVoy arranged the last stanza into this choral piece, performed by The Same Stream.

I cast my heart into my rhymes,
That you, in the dim coming times,
May know how my heart went with them.

St. Patrick’s Day is Sunday, so here are some numbers and facts on Ireland and the Irish.

1.76 million = Irish who say they speak Irish on occasion, when filing an affirmative action claim, or when they’re drunk
73 thousand = Irish who claim to speak it daily (source)

Irish does not have yes and no as words. Instead they respond affirmatively or negatively, such as “Sure, we do,” or “I wouldn’t say that.” Many of them follow this pattern in English too. (source)

6 = Number of times more likely you will be murdered in Ireland than in England or Wales. (source)

“It would be great then if the Americans and the Germans who come to Dublin in large numbers, and claim to love the city, had [Karl] Whitney’s book in hand rather than, say, Ulysses, or some official guide book, and began to pay attention to the city’s underground rivers and its great unfinished estates, not to speak of the strange bus routes and the many holes in the ground, the hidden and essential life of Dublin.”

All Irish can sing; many can dance. “Most – if not all – people I’ve met can do at least part of the original Riverdance. They bring it out at nightclubs, weddings, funerals. They also stand on tables and sing the national anthem at the end of the night. In Australia this only happens at sporting events, school assemblies and anti-immigration rallies but here it’s just the bar’s way of telling you to bugger off home. “

Death is a big deal. “I’ve been to better Irish funerals than Australian weddings. ” (source – cautions)

Photo by Diogo Palhais on Unsplash

Here’s the best-loved Irish hymn, “Be Thou My Vision,” done by… I don’t know whom. A male group. I chose this version because it includes the often-skipped third verse, beginning, “Be Thou my battle-shield…”

The original could well have been known by Father Ailill, the narrator of my Erling novels. It’s often attributed to the sixth-century Saint Dallan, though some scholars date it to the eighth century. Pre-Viking in either case.

It was first translated into English in 1905, but the singable verse version was done by Eleanor Hull in 1912. The tune would not have been used by medieval monks, but is an Irish folk tune called “Slane.”

I’ve let other things crowd out St. Patrick’s Day for me. My days have plodded steadily this year. I haven’t given much thought to future plans, but remained within the day.

Still, out of respect for the day, here are two poems with kinds of longing.

Patrick Pearse, “On the Strand of Howth” : (Entire poem)

Speaking in the night;
Of the voice of the birds
In Glenasmole

I was embarrassed
By old men standing up to shake my hand
And tell me they were ‘sorry for my trouble’.
Whispers informed strangers I was the eldest
Read more through the links. 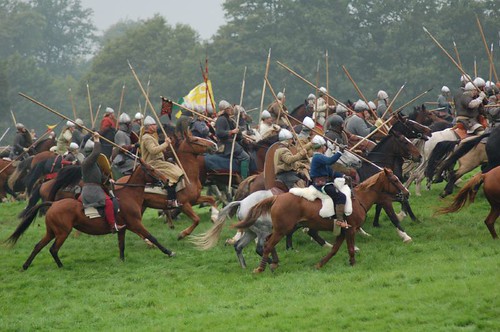 October 14 was the 950th anniversary of the Battle of Hastings. Peter Konieczy of the University of Toronto offers three reasons why this was not a typical medieval battle. One reason was that the Normans and the English were evenly matched.

We can read some of the battle’s details in this post on a French poetic account, Estoire des Engleis – History of the English, by Geoffrey Gaimar. It includes a part about a Norman juggler who demonstrated his spear skills before the English army.

Konieczy also touches on how the Normans meddled with the Irish several decades later, never fully conquering them, and by 1180, “would leave the island unstable and divided.”

Well, I actually finished this book, which is more than I can say for a lot of Viking novels I’ve started reading. And there was evidence of some research in it – it’s certainly way more historically accurate than the History Channel series, which we hates, we does.

The date is given as 852 AD. Our hero is a Norwegian named Thorgrim Night Wolf. Thorolf is reputed to be a shape-shifter, a werewolf, but the descriptions make it difficult to figure out exactly what happens when he goes out on his nocturnal excursions. Sometimes he only dreams of roaming as a wolf, but he still comes back with useful real-world information. Thorolf is the son-in-law of Jarl Ornolf the Restless, and the father of a son named Harald. They sail to Ireland for booty, and then happen onto a treasure, the Crown of the Three Kingdoms, which was being sent to one of the Irish kings. The crown is to give him symbolic dominion over the other Irish petty kings, so that they can fight the Danes, who have recently driven the Norwegians out of the Viking town of Dubh-lin.

Thereafter the characters and the plot wander about the Irish countryside, getting captured and escaping, losing the crown and a couple hostages to one another like basketball players bobbling a ball. There are some clever moments, especially in the use of ships (author Nelson is an experienced sailor on square sailed vessels), but I personally found it all a little contrived.

As I said, there’s some evidence of historical research here, but the errors are many. Two of the characters are named Snorri and Magnus, names not invented until the 10th and 11th Centuries. The author thinks Viking houses had windows (windows were extremely rare). He thinks Viking ships kept the warriors’ shields up on the rails while at sea (they didn’t). He thinks Norwegians knew nothing of burning peat (they did). In one regard author Nelson praises the Irish Christians for virtues even I, an openly sectarian author, wouldn’t claim – he thinks they weren’t superstitious. The subsequent history of Ireland makes it very clear that whatever good Christianity did for that country, it didn’t eradicate superstition.

I suppose it’s unreasonable to expect an author who hasn’t spent a lifetime in obsessive study of the Vikings, as I have, to know all these things. I expect, after all, that there are even greater compulsives out there who find as many errors in my own novels.

Nelson does do a good job in dramatizing the great irony of Viking Age Ireland – that the Irish hated each other just as much as the Scandinavians, and were as brutal – or more brutal – with each other than the Vikings were with them.

So my final judgment is fairly neutral. The writing is OK (though the author needs to learn where to use “like” and “as”). There are a couple mildly explicit sex scenes, and of course there’s lots of fighting and blood and guts. You could do worse for a Viking novel, but you could also do better. I’m not personally impressed enough to buy the second book in the series.