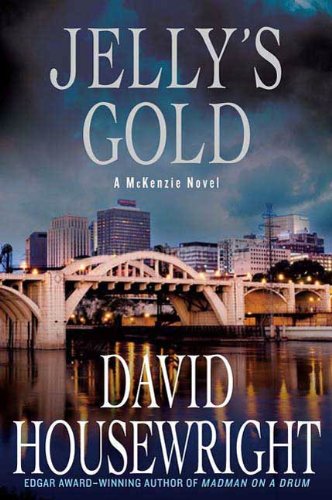 This one was fun. One of my favorite sub-genres is what I might call the “archive mystery,” where the detective digs into an old, unsolved crime, examining dusty documents and deserted buildings, and talking to old-timers (if there are any left).

Jelly’s Gold centers on Frank “Jelly” Nash, a legendary bank robber, who was rumored to have stolen gold from a South Dakota bank in 1933. That very night he was in St. Paul, hobnobbing with local society (St. Paul was an “open city” in those days – it was understood that gangsters could stay in town, spend their money, and not be bothered by the police, so long as they didn’t break any local laws). A few days later, Jelly was shot to death in Kansas City. But rumor persists that he left his gold with one of his rich St. Paul friends, and it’s never been found.

When this story starts, St. Paul millionaire detective Rushmore “Mac” McKenzie is approached by an old friend, a female graduate student. Her boyfriend believes he knows how to find Jelly’s gold, and they figure Mac can help them. He’s intrigued enough to start looking into it. He soon learns that others are on the same trail – and then someone is murdered.

I found Jelly’s Gold fascinating. I was annoyed by another snide reference to Minnesota’s concealed carry law (which has actually worked out pretty well, thank you). On the other hand, a student at Bethel University, a Baptist school, plays a part, and she’s treated with surprising respect. I thought I figured out whodunnit, but I was wrong, which is always fun.

Cautions for… well you know. But this was a particularly good one, to my taste.