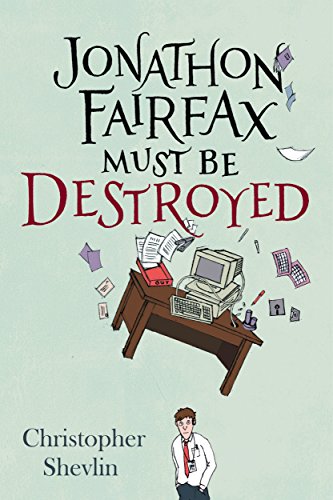 I was a little disappointed with this sequel to Christopher Shevlin’s The Perpetual Astonishment of Jonathon Fairfax, which I reviewed favorably a few days back. But I’m not sure I’m being fair.

When last we saw our shy, ineffectual hero, he had survived great dangers and won the girl of his dreams.

At the beginning of Jonathon Fairfax Must Be Destroyed (set five years later), the girl of his dreams is completely out of the picture. He is living with a different girlfriend, and he’s working at a job he hates, as a temp at Fylofax, the most powerful corporation on earth. Jonathon isn’t quite sure what Fylofax does, but then nobody else is, either. In fact, the company’s unprecedented growth is the result of blatant fraud on the part of one of its top managers, an American who is on the verge of taking it over completely. He will do anything to succeed, including cold-blooded murder. By chance he becomes aware of Jonathon’s existence, and grows convinced that he’s a corporate spy. Therefore, Jonathon must be eliminated – from the face of the earth.

Meanwhile, Jonathon experiences unemployment, a breakup with his girlfriend, homelessness, and falling in love with another girl of his dreams. As in the previous book (and I didn’t really make this clear when reviewing it), Jonathon is more a maguffin than a hero, a calm, somewhat stagnant center for the story, and most of the real action revolves around his handsome, elegant friend Lance Ferman, who is Jonathon’s exact opposite, except for the fact that they’re both men of good will.

I had the impression that this book was less funny than its predecessor, but that may just be my prejudice. I took almost personal offense to the author’s writing out Rachel, the love interest in The Perpetual Astonishment… Her disappearance was explained, but I didn’t really buy it, and I think it embittered me. There were a lot of funny moments, and I laughed, but it wasn’t the same (for me). Brief, not too biting, jabs were taken at Christianity and at capitalism (though to be fair that was mostly at Ayn Rand, whom I don’t like either).

So you may want to ignore my jaundiced viewpoint. Jonathon Fairfax Must Be Destroyed is still funnier than most books around. Cautions for language and sexual situations. Also (once again) semi-comic murder.