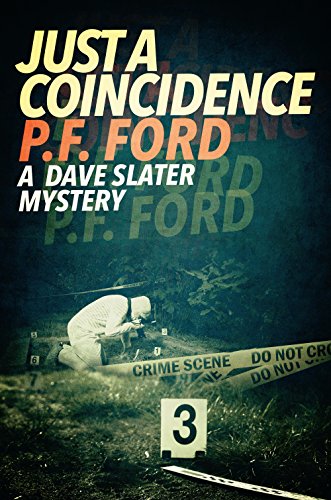 This is number two in the Dave Slater mystery series by P. F. Ford. I enjoyed the first one, and reviewed it just below. This one was fun too.

At the start of Just a Coincidence, Dave, a detective sergeant in the small English town of Tinton, is called to a crime scene, after a dog walker has discovered a woman’s body, battered to an extent that seems hardly possible. The dog that first found the body then runs up with a human femur in his mouth – an old one. A search of the area uncovers a shallow grave containing the bodies of a woman and a young girl.

And then it gets really weird. Turns out all three bodies are related.

Dave Slater once again teams up with the inveterate optimist DS Norman. The trail leads to a millionaire who practices serial monogamy and a smuggling operation run by shadowy Eastern European gangsters. The investigation is hampered by an unstable team member who creates dissension in the police ranks. And all through, DS Norman does his best to keep Dave thinking positive.

I enjoyed Just a Coincidence just as much as I enjoyed Death of a Temptress. The writing isn’t always the best, but the entertainment never flags. Author Ford has an interesting way of taking characters in unexpected directions, so the reader should never take anything – or anyone – for granted.

Recommended for grownups. Cautions for language and stuff.