I kind of enjoyed Lines of Duty, the first book in Mark Hazard’s Deputy Corus series, set in King County, Washington. So I went on to Book Two, Thin Gray Lines.

Corus, who was a police trainee in the first book, is now a rookie with the department. His boss decides his particular skills, honed in Special Operations, will be useful in investigating a drug operation that seems to be operating on a very large onion farm downstate, near Walla Walla. He sends Corus off with his superior, Danny Jamison, to babysit him, but Danny has other plans. He wants to spend the weekend with his wife, working on their marriage problems. So Corus ends up going on his own.

He decides to go in undercover, as an illegal Hispanic laborer. He will encounter the strange, dysfunctional family that runs the place, along with their innocent daughter and her lover, a South African struggling with his conscience. Also various bad guys, not so bad guys, and plain victims, including an illegal laborer trying to actualize the teachings of Tony Robbins. The final showdown will be – literally – explosive.

Thin Gray Lines was entertaining and engaging, with the same positive energy I noticed in the first book. What I didn’t like about it was, first of all, that the amusing cast of characters we got to know in the last book get very little time on stage in this one. Also, there was some New Age stuff, and a negative depiction of strict Christian groups.

So I guess I won’t go on with this series. But it’s not bad.

Sometimes a novel can be fairly ordinary in itself, but will reveal intriguing possibilities. That was my reaction to Lines of Duty, by Mark Hazard, first installment in the Deputy Corus series.

“Corus” is the only name of the main character; he has no first name (This is the second book I’ve read recently with a one-name character. Can you even do that in the modern world?). His personal background is mysterious, but the book begins with his last day on Special Forces duty in Afghanistan. He is a brave and decorated soldier. Shortly after his return to the States, he and his wife establish themselves in Seattle, where he has enrolled in a special, elite police training program.

Corus is the best shot in his class. Another classmate, Albert Chu, is the best academically. They fall into an odd, symbiotic friendship as they deal with the considerable pressures of the program. One day, while they are doing grunt work with unclaimed evidence, Corus discovers some diamonds that were never reclaimed by their owner. That, along with other strange points about the evidence, leads him and Chu to poke into the old case. This will have them investigating rodeo people, drug dealers, and an eccentric old lady with an amazing heart.

The author, Mark Hazard, is – judging by this book – good at characterization, but middling on dialogue. His characters sometimes talk like books. But I still liked the characters, and there’s an attitude of positivity here that I can’t help liking. I’m reading the second book now.

Mild cautions for language and violence. 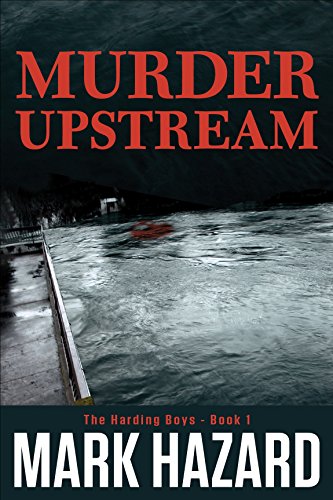 If you think a book is well written, but it still didn’t work for you, do you give it a positive or negative review?

I guess I’ll go negative, because I’m a small, vindictive man. But I’ll be honest about my reasons, so you can make adjustments for that.

Murder Upstream is set in a small fictional city called Harding. The rich people live upstream, on the high ground, and the poor people live downstream, where it’s flooding right now, after a period of heavy rains. A beautiful young woman, heir to one of the city’s top real estate developers, is found bludgeoned to death outside her family home. Detective Kyle Villante is sent to investigate, getting assistance from Det. Solomon Aduwo, on loan from the state police. Their investigation pokes into social tensions, environmental concerns, and local organized crime (with which Kyle has connections thanks to prolonged work as an undercover officer).

Murder Upstream was competently plotted and well written (though there were too many typographical errors). My only real objection was that I didn’t care much for the hero. Kyle Villante is metrosexual in his personal grooming, arrogant in his musical tastes, promiscuous in his sexual habits, and inclined to cut legal corners on the job. In real life, I think, a guy like this wouldn’t last long on an honest force, even if his motives were good.

I should mention in his defense, though, that the author inserted one or two of what I’d call “moments of grace,” where he showed real compassion and human empathy. But – for a stuffy moralist like me – it just wasn’t enough. Your mileage may… you know.