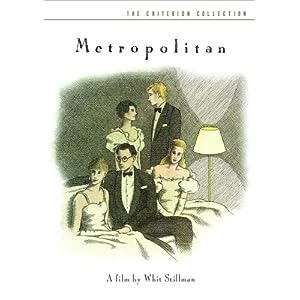 On Sunday I watched my weekly Netflix rental, this one a movie I’d only seen once before—Whit Stillman’s Metropolitan.

I’m going to have to buy the whole Whitman trilogy, delightful films that yield increasing rewards with each viewing. Stillman is apparently a Christian of some kind (for years he’s been trying unsuccessfully to do a movie about believers in the Caribbean. Metropolitan opens with the chords of “A Mighty Fortress Is Our God”).

Stillman delights in turning cultural expectations on their heads. In Metropolitan, his first film, he portrays Manhattan “Yuppies” (one character insists they ought to be called “Urban Haute Bourgeouise”) as sympathetic and even mildly disadvantaged. In Barcelona, two American cousins, a businessman and a naval officer, deal with the European narrowmindedness and prejudice. And The Last Days Of Disco, set in Manhattan in a strangely ambivalent time period, celebrates the discotheque as a place of joy and a strange kind of innocence.

At one point in Metropolitan, Tom Townsend (Edward Clements) quotes a Lionel Trilling review of Mansfield Park to debutante Audrey (Carolyn Farina), in order to explain his dislike for Jane Austen. Audrey asks him what books of Austen’s he’s read. He says, “None. I don’t read novels. I prefer good literary criticism. That way you get both the novelists’ ideas as well as the critics’ thinking. With fiction I can never forget that none of it really happened, that it’s all just made up by the author.” The great joke is that the film itself is pure Jane Austen, though the comedy of manners has been transported to a small fortress of civility in a barbarian land. END_OF_DOCUMENT_TOKEN_TO_BE_REPLACED