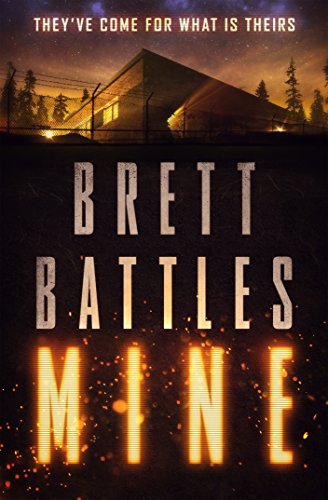 I’m fond of Brett Battles’ Jonathan Quinn novels, so I bought Mine. It wasn’t what I expected – I think of Battles as a thriller writer. But this is a science fiction/coming of age story. Nevertheless, I read it to the end and enjoyed it.

One night years ago, seven teenagers took an illicit forest hike, away from their summer camp. Only three came back, and they were changed. Joel and Leah were suddenly off-the-charts intelligent, sucking up knowledge like vacuum cleaners. They also became stronger and faster than normal people. The third camper, Mike – well, he adjusted less well than the others, who made efforts to disguise their unusual gifts. Each of them forgot most of the events of that awful night, even one another’s names.

But Leah, now a young woman, discovers a clue, which leads her, eventually, to Joel. But Joel doesn’t want to remember what happened. He wants to drop out of sight and live in obscurity. They gradually realize, however, that they’re not alone in their own heads – someone or something is using them. And they finally agree that the only way to get their freedom is to return to the place where it all started.

Mine was tightly written, well charactered, and compelling. I recommend it. I don’t recall much in the way of objectionable material.

My only quibble is an epilogue the author felt it necessary to include. Such epilogues show up again and again in SF stories, and they’re all the same and totally predictable. I wish he’d done something else.

But that’s a small thing.