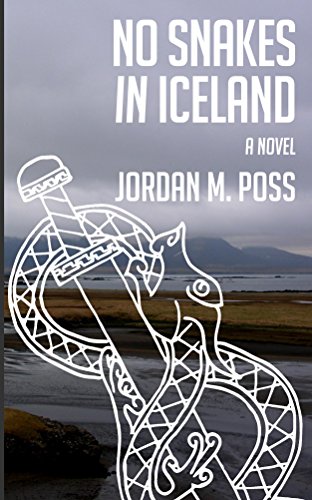 What do you say when you imagine yourself the only author in the world to write a certain kind of novel, and then find yourself reading a novel of a very similar kind, in a very similar style?

If you’re me, you breathe a sigh of relief. Because it means you’re not the only one who sees a need for such a book.

I don’t mean to suggest (let me hasten to add) that I think Jordan M. Poss, author of No Snakes in Iceland (he could have found a better title, I think) borrowed from my work in any way. I think he’d have handled some things differently if he’d read my books. But this is a Christian fantasy story of Vikings, told from an outsider’s point of view, written in a style that leans heavily on Old English vocabulary in order to convey a flavor of the time and the original language.

Edgar, the hero of No Snakes in Iceland, is an Englishman, a poet and a chronicler, formerly in the service of the king of England. Following a personal tragedy he went slightly mad, and the archbishop of Canterbury bade him go abroad somewhere where his enemies dwell, to learn to forgive them. So now he’s living in a missionary monastery in Iceland (a fictional institution; I’m pretty sure no monasteries existed there at that point). When a distant chieftain asks his abbot to come to his home to “kill a ghost,” the abbot pleads his age and sends Edgar instead, along with a pair of monks.

There Edgar engages, mostly against his will, with a variety of Icelanders, chieftains, common folk, and slaves, and faces the challenge of an Icelandic ghost – the Norse kind who walks by night in a physical body, grown to giant size, kills livestock and people, and rides houses like horses. Gradually he learns to respect and even like these people, as he tries to find a way to do the seemingly impossible.

It’s a good book. I liked it a lot. The author has clearly done a respectable amount of research, though I can point to a number of minor inaccuracies – he has a thrall carrying a sword, he thinks there were towns in Iceland in the Viking age, he makes wine more common than it was, etc., etc. But the overall effect is admirable. He excels in descriptions of nature and the conveyance of atmosphere. And the Christian passages are handled well, generally the chief challenge for the Christian novelist.

So I recommend No Snakes in Iceland highly. If you liked my Erling novels, I think you’ll like this one. Cautions for a very small amount of coarse language.