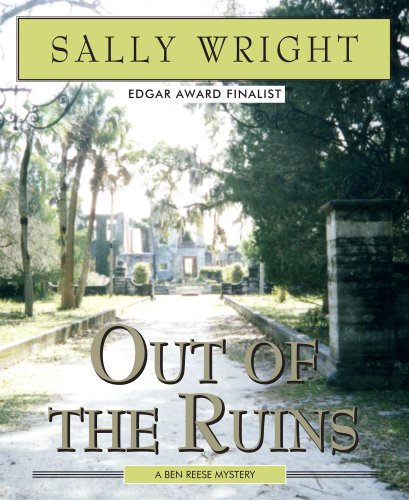 Book four in the Ben Reese mystery series by Sally Wright is Out of the Ruins, a venture into Southern Gothic. In this episode, archivist Ben has returned to his university in Ohio from Scotland, but is taking some sabbatical time to travel to the South, to evaluate a collection of art being donated to his school. While there he gets a call from an old friend named Hannah Hill, who owns a large estate on Cumberland Island, Georgia. Hannah suffers from MS, and is confined to her bed. She is concerned about local attempts to acquire her estate for development, or for a national park. Also, she has had “dreams” about a masked figure coming into her room at night and spraying things with a spray gun.

By the time Ben arrives, Hannah Hill is dead, apparently of pneumonia. Most suspicious. He enters a world of old family feuds, greed, and hypocrisy, in which Hannah’s heir – a young female opera singer – is the target of long-simmering, murderous hate.

Out of the Ruins was not my favorite book in this series. I found the action of the climax kind of hard to follow. And author Wright, though generally a good writer, has one bad habit that annoys me. When writing telephone conversations, she employs what I call “TV phone call writing.” You know how it goes on TV – you only hear one side of the conversation, so they have to have the character on screen repeat everything the character on the other end says, even though people don’t do that in real life (Bob Newhart did some great comedy routines in that format back in the ‘60s). There are only two ways to handle phone conversations in a novel, in my opinion. Either leave the reader uncertain about what the unheard party is saying (this could be useful in a mystery), or just give us both sides of the conversation.

But Out of the Ruins was generally entertaining, and I enjoyed reading it. Recommended.