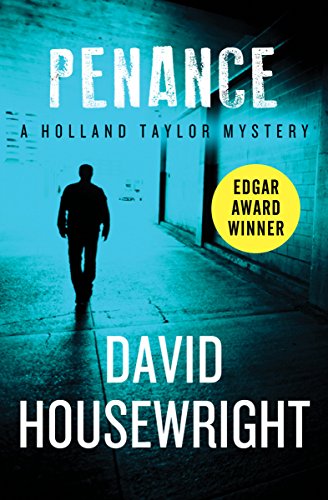 All in all, it’s a great time to be a private investigator: Nobody trusts anybody.

Sometimes – rarely, of course – I surprise myself with my ignorance. Discovering a “new” detective author whom I would rate on the level of John Sandford and (before he went full PC) Robert B. Parker was a surprise. Finding out he’s a local (Minneapolis) author amazed me. But so it is. David Housewright is a very good hard-boiled writer, and I’m enjoying his Holland Taylor series a lot.

At the opening of Penance we find former police detective, now private eye, Holland Taylor in an interrogation room, being grilled by two policemen. He was surprised to be arrested, but not surprised when he learned the reason. The drunken driver who killed Taylor’s wife and daughter, recently released from prison, has been murdered. Taylor is the obvious first suspect.

As suddenly as he was arrested, Taylor finds himself released, and he returns to his current case, which involves a beautiful, dark horse, third-party gubernatorial candidate who is being blackmailed. Eventually he learns there’s a link between the first case and this one, and things get convoluted and deadly. In the end the revelations he unearths will be genuinely shocking.

The plot’s more complex than it needs to be, with too many characters and plot lines. But the story gripped me and the narrator was fascinating. Widower detectives have gotten to be a trope (because the situation offers lots of scope for female companionship, and an excuse for not bonding), but author Housewright handles the trope well. I was hooked, and I’ve been scarfing these books up one after another. More reviews to come.

The stories are a little dated, being written back in the 1990s (though a fourth in the series came out this year). The usual cautions for language and mature situations apply. The politics are hard to nail down – which is just fine by me.