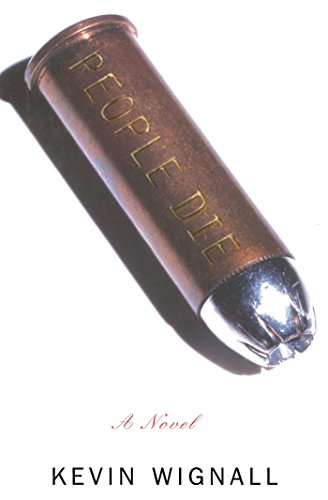 He did feel bad for burdening her, yet at the same time he’d wanted to tell her much more: that he was lonely, that he felt like indistinct bits of him were dying, that nothing was clear anymore. It was enough though, what he’d told her was enough, like a gasp of pure oxygen, burning the tissue of his lungs.

I’m not entirely sure what to make of People Die, Kevin Wignall’s debut novel. It’s not exactly amoral, but not exactly moral either. I suspect it’s one of those sophisticated books not intended for middlebrows like me.

JJ Hoffman is a freelance hit man, based in Geneva. He has an impeccable reputation in his field – he does his work efficiently and dispassionately, leaving no metaphorical messes behind.

But now he has found his handler murdered, and rumor says that several others of his colleagues have been killed too. Almost by coincidence (I think it counts as a minor deus ex machina) he is contacted by an American who tells him he knows what’s going on. He wants JJ to come and visit him, at an inn in New England.

The problem is that the inn is owned by a woman whose husband JJ murdered a few years ago.

People Die is a well-written tale. I thought it passed the bounds of plausibility a few times – and not in the normal way of thrillers, on the action side. The implausibilities here are psychological. And the resolution just made no sense to me. There’s a kind of grace at work here (in fact the book could be seen as a sort of Christian metaphor), but there’s an amorality at the same time. I couldn’t work out what to think about it in the end.

Worth reading though. Cautions for language, violence, and adult themes.