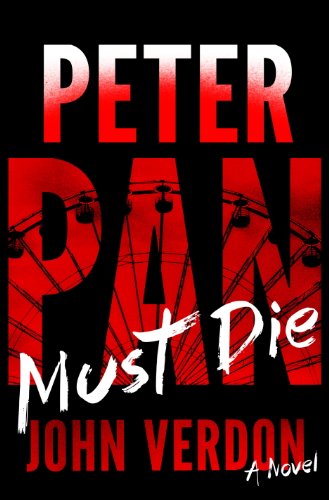 At times like this he always recalled, uneasily, that everyone on earth at a particular latitude sees the same stars in the sky. But no two cultures see the same constellations. He’d seen evidence of the phenomenon again and again: The patterns we perceive are determined by the stories we want to believe.

Another novel in John Verdon’s interesting – and somewhat disturbing – series of mystery-thrillers starring David Gurney, retired NYPD detective. Now living with his wife on a farm in the Catskills, he keeps getting diverted from the peaceful, pastoral pursuits she prefers to various murder mysteries that people bring to him.

At the beginning of Peter Pan Must Die, Dave gets a request for help from his friend Jack Hardwick. It’s really more than a request, and his relationship with Jack is more complex than ordinary friendship. A constitutional rebel, Jack has helped Dave in previous cases by passing him information civilians shouldn’t get access to. Now Jack is calling his favors in. He’s been fired from the state police and has set up as a private investigator. He’s got a big case on the line, and needs “famous” Dave’s participation to close the deal.

Jack’s client is the wife of Carl Spalter, a hard-driving real estate tycoon who was running for governor. Spalter was shot fatally by a sniper during his mother’s funeral, and the wife was convicted of hiring the assassin. She thinks – and Jack agrees – that the defense was incompetent and the prosecution corrupt. All they need to do is identify the holes in the prosecution case, inform her new attorney, and bank their payment check.

But that’s not enough for Dave. What obsesses him is the solution, what really happened. As he examines the evidence, he discovers that the murder shot could not possibly have been fired from the spot which ample evidence shows the killer must have used. That’s only the first of the conundrums that will fuel his obsession and ultimately put him in conflict with – very possibly – the most dangerous human being he has ever encountered.

Like all the books in the Dave Gurney series, Peter Pan Must Die was fascinating and engrossing. But there’s something more – an unease, the constant dissonance in Dave’s marriage and the underlying knowledge that something is seriously wrong with Dave. He analyses everything except his own heart, and is blind to the subconscious urges that force him to put himself – and often the people he loves – in danger again and again.

Cautions for language, adult themes, and intense situations. Highly recommended if this is your sort of thing. The final twist is pretty good too.