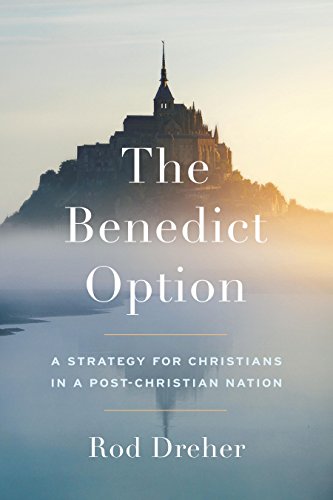 “When a man first comes to the monastery, the first thing he notices is everybody else’s quirks—that is, what’s wrong with everybody else,” said Father Martin. “But the longer you’re here, the more you begin to think: what’s wrong with me? You go deeper into yourself to learn your own strengths and weaknesses. And that leads you to acceptance of others.”

OK, this time it is a review. I read The Benedict Option, by Rod Dreher.

I won’t lie to you–I didn’t want to. I had a pretty good idea what this book would be—a depressingly realistic appraisal of the current, radically changed situation in which orthodox Christians find themselves. Plus a series of suggestions for dealing with the new normal—all of them uncomfortable.

Dreher describes how the situation of the (small “o”) orthodox church in America (and in the west as a whole) has changed, suddenly and (apparently) for the foreseeable future. Thanks to the cultural earthquake that the Gay Movement brought forth, Christians who had been ensconced, relatively comfortably, within our culture just a decade ago are now an isolated, and increasingly threatened, minority.

Dreher sees no chance of altering that situation through politics or public relations. All we can do, he believes, is what Saint Benedict of Nursia did in the 6th Century, after the fall of Rome. Benedict founded western monasticism, creating communities of committed believers who cared for one another, cared for their neighbors, and preserved the wisdom of the Classical age for the future. Little Noah’s Arks in a sea of barbarism. END_OF_DOCUMENT_TOKEN_TO_BE_REPLACED

This is not a review. I haven’t read Rod Dreher’s The Benedict Option, because I’m depressed enough as it is.

However, I’ve heard the book discussed a lot recently. Today Michael Medved interviewed him on his program, and I got a little better picture of Dreher’s argument. It was different from what I assumed.

When I first heard that Dreher was urging today’s Christians to adopt the tactics of Saint Benedict of Nursia, who founded the Benedictine Order, my thought was, “That’s not realistic. Our situation is nothing like Benedict’s.”

Benedict responded to the decline of civilization by creating communities where the old truths – as well as the old civilizational treasures – could be preserved.

It seemed to me that that model wouldn’t work today. Although Benedict lived in hard times, his culture had not turned its back on Christianity as such. He was able to carry on his educational program without officious bureaucrats coming in and shutting him down for crimes against diversity.

In the near future, it seems to me, we won’t be allowed to run schools. Not only will we be unable to start institutions, the institutions we have will likely be shut down or repurposed.

But in today’s interview, Dreher was clearly aware of those problems. He’s talking about acting in secret, underground ways, and building our faith communities on smaller, more intimate models. Things like house churches.

That, it seems to me, is probably how it will have to be.

I have no fear that the Church as such will die. It’s Christ’s church, and he will keep it until He returns.

I do wonder whether the Church in the west will die. The Book of Revelation warns sharply that Christ will “take away the lamps” of churches that do not hold out to the end. I fear our lazy, selfish, lukewarm churches may have exhausted His patience.

“The Benedict Option fails to ask how black believers have survived racial, economic, and social marginalization with their faith intact.” Jemar Tisby offers an important perspective to Rod Dreher’s new book, a book he has mulled over for at least ten years. When considering options for the persecuted church in America, it seems natural to look to those portions of the church that have lived through persecution, but as Tisby writes, this is a continuing blind spot for many white people.

The reality for many white believers is that Christians of color may provide inspiring stories of resistance and are certainly nice to have on display in the congregation, but they are not a true source of wisdom for the white church. To some white Christians, the faith traditions of racial minorities may offer great aesthetics like preaching or musical style, but they don’t have the legitimacy to lead the way into the future. The constant refusal to learn from the black church can only be termed ecclesiastical arrogance.

The Real Reason the Benedict Option Leaves Out the Black Church

Dreher did start a conversation about the black church four years ago, asking why it hadn’t influenced communities more. That doesn’t answer Tisby’s critique, but it does offer a bit of context.

My main fear with Dreher’s book is that the people who need it most won’t read it. How do you convince Americans that replacing fast food and cable news with fasting and hard labor will be good for their souls?

Overwhelming evangelical support for Trump suggests not many conservative Christians would agree with Dreher that “losing political power might just be the thing that saves the church’s soul.” Rather, they seem to believe the American Empire needs our partisan politics in service of God’s kingdom.

Dreher will have many interviews this week. This one with Russell Moore is bound to be one of the better ones.

Rod Dreher writes about his hesitation over a potential proposal to work with a man on his memoir.

He had read my 2013 memoir, The Little Way of Ruthie Leming, and saw potential for us to collaborate. Knowing Wendell [Pierce]’s formidable reputation as an actor, I was flattered that he had read my book—and humbled that he thought it good enough to consider hiring me to help him write his own. So why my skepticism?

Wendell and I come from the same state and are of the same generation, but we grew up in different worlds. He is a black liberal from the Crescent City; I am a white conservative from the rural hills of West Feliciana Parish. How could we possibly have enough in common to work together?

Dreher’s wife told him that he does work on the book, it’ll be good for him spiritually. Find out what happened with Dreher and Pierce in The American Conservative.

Last year, we wrote about Rod Dreher’s book, How Dante Can Save Your Life,, noting that following your heart will kill you dead and sin is a damaged form of love.

Chris Fabry interviewed Rod about his experience going through depression, attempting to reconcile with his family, and learning more from Dante than his counselor. If you haven’t read his book already, this will give you insight into what you’ll find there.

Rod Dreher has written a personal reflection on Dante’s Divine Comedy in a book called How Dante Can Save Your Life. Readers are posting mixed reviews, partly, it seems, because they don’t understand the depth of the subject matter. Dreher quotes a review and offers some reflection on the family matters he revealed in his book:

Given his life experiences, it would have been easy for Dreher to paint himself as a victim and blame everyone else for his woes. But neither God nor Dante allows him to do so. Rather, as he descends the levels of the inferno and then ascends the cornices of purgatory alongside the Florentine poet, he comes face to face with his own propensity to make golden calves out of his family and his tradition: in a word, southern ancestral worship. Yes, his father and sister must bear some guilt, but Dreher alone allows himself to become bound to these false idols.

He says, “For me, Dante’s understanding of sin not as lawbreaking but as a damaged form of love was important to understanding my crisis situation, and how to break out of it.”