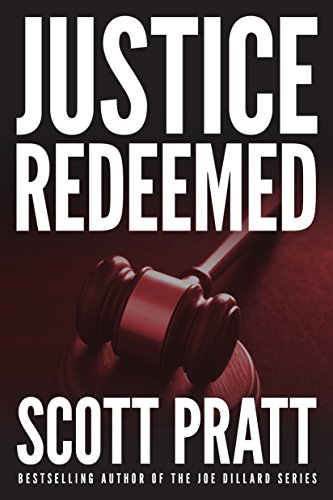 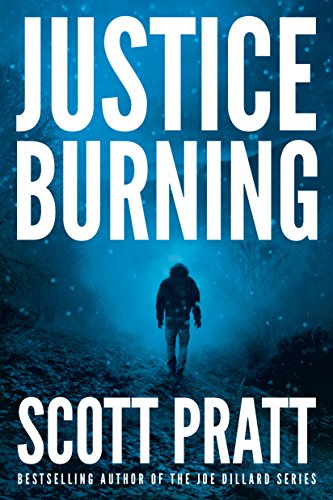 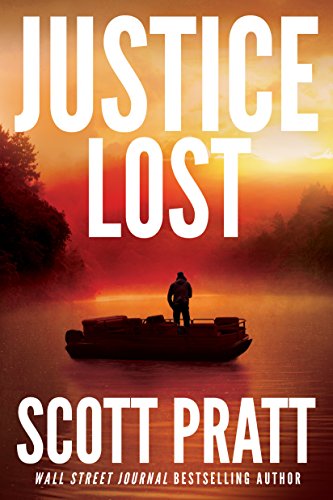 I’ve enjoyed Scott Pratt’s Joe Dillard legal thrillers, so I picked up the three (to date) novels in his Darren Street series, Justice Redeemed, Justice Burning, and Justice Lost. I’ll review them in one fell swoop, because I found them weird. Problematic. Though well written.

The first book, Justice Redeemed, starts with a very clever hook. Imagine you’re a criminal defense lawyer, and the worst person you’ve ever met walks into your office wanting you to defend him. He basically admits (without remorse) the rape and murder of two little boys. When you refuse his business, he explicitly threatens your own young son. You appeal to the police, but they tell you they can’t do anything about the guy. END_OF_DOCUMENT_TOKEN_TO_BE_REPLACED 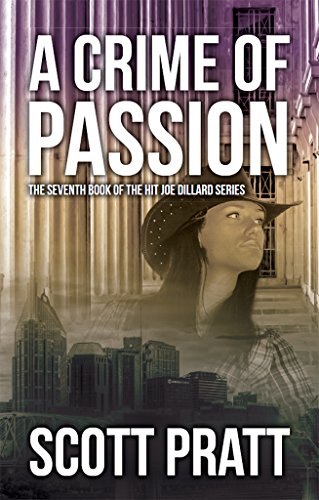 “I got the impression they’re friends, but not the kind of friends you and I have. This is Nashville, Caroline. The state capitol. The seat of power and money in the state. Friendship here means something entirely different than it means back home. I’m out of my league.”

And now at last I come to A Crime of Passion, the last book in my current reading of Scott Pratt’s Joe Dillard legal mysteries. It’s not the last book in the series to date, though. The next book is Judgment Cometh (and That Right Soon), which started me off on reading this series. But I’ve reviewed that one already.

This time around, Joe, defense lawyer from northeast Tennessee, is summoned – to his great surprise – to Nashville by a beautiful former Country music star. Her husband, a record company owner, has been accused of murdering a young female singer who was a rising star in his talent stable. Joe has been recommended to her, she says, by a friend who says he’s smart, honest, and relentless. Joe is uneasy about moving into an alien environment where he doesn’t know the power structure, but she makes him a money offer he can’t refuse.

He finds himself in a snake pit. His client is a womanizing crook. His client’s wife is a devious seductress. Everybody has their own agenda, and everybody is lying to him. The district attorney casually suggests a way he can fix the trial, for a price. A certain party is considering murdering Joe. Nobody expects him to be able to play in this league. But country boy Joe has a trick or two of his own in his repertoire.

Scott Pratt gets better and better as a novelist. I liked A Crime of Passion very much. Cautions for the usual adult stuff. Recommended.

And I continue through Scott Pratt’s Joe Dillard series of legal thrillers. This one was a particular pleasure. An attractive new character has been added to the cast, and the story is almost old-fashioned in its moral purpose.

Charleston Story, the central character in Blood Money (it was originally written as a stand-alone, but author Pratt revised it to fit into the Joe Dillard series) is a young lawyer who’s had a rough life. She lost her parents young, and grew up in some poverty, living with an eccentric uncle. But she has persevered, and is now starting out as a lawyer. Joe Dillard, defense attorney, likes her (his son Joe likes her even better) and takes her on as an associate. She takes the case of an elderly man whose son is trying to get him declared incompetent. Suddenly and dramatically, “Charlie” finds herself the old man’s heir, after his unexpected death. But he hasn’t just left her his modest property. He left her an old family secret, the key to unimaginable riches. But the riches come with a curse. The old man’s greedy and ruthless son is the least of her worries.

Charlie is an appealing, spunky character, and there are a lot of thrills in her story. I thought the book’s final resolution a little predictable, but it was none the less satisfying. I had fun reading it. Mild cautions for language and adult themes. 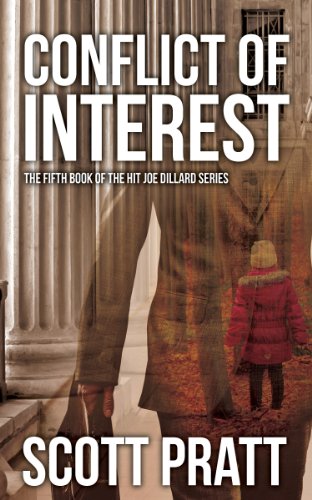 Another Joe Dillard legal thriller from Scott Pratt. I’m going through them pretty fast, and growing fond of the regular cast of characters. This one, I thought, was the best I’d read so far.

In Conflict of Interest, Joe (who is back in private practice) is retained as an attorney by a couple whose young daughter has been kidnapped. They tell him the police have been treating them as suspects in the crime, and they want someone to look after their interests. Joe explains that working for both of them could cause an eventual conflict of interest for him, but they assure him they’re in this together and it won’t be a problem. Little do they know.

Joe ends up acting as the bag man, carrying the ransom money (raised by the mother’s wealthy father) to the drop site. A plan by the grandfather’s security people to catch the kidnappers fails, and Joe comes under suspicion. But the greatest suspicion falls on the father, who is arrested, and Joe gets thrown off the case. But he has a passion for the truth, and he goes after the kidnappers himself. Joe is not a man to underestimate.

Conflict of Interest is an excellent entry in a great series. I particularly liked that this one spent a little less time on derring-do than the previous book, and concentrated more on legal maneuvers and relationships. Again, Joe’s wife’s battle with cancer forms one of the subplots. 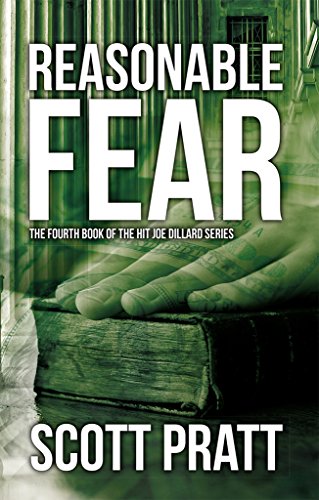 I’m still reading Scott Pratt’s Joe Dillard books, and so far he hasn’t hit me with the ideological pies in the face I feared at the beginning. I’m finding the books highly enjoyable, though this one gave me moments of genuine distress.

In Reasonable Fear, Joe Dillard, District Attorney General in northeastern Tennessee, takes an interest in the discovery of the bodies of three young women, found drowned in a lake. Evidence points to a real estate tycoon, who turns out to be much more than that. The man is a drug smuggler, closely tied to the Colombian cartels. He feels himself invulnerable, because if someone displeases him he can call on a notorious, merciless assassin to solve his problem. Right now his problem is Joe Dillard. Unless Dillard can come up with a way to stop him, he and his family, already facing cancer, alcoholism, and an unplanned pregnancy, face a horrible fate.

Reasonable Fear was fast and gripping. I enjoyed it. Cautions for the usual. Not for the faint of heart.

I’m powering my way through Scott Pratt’s Joe Dillard series of legal thrillers. Book number 3, Injustice for All, is exactly what the title advertises. The world is full of injustices, and Joe, now District Attorney General in his corner of northeastern Tennessee, is doing everything he can to try to protect a few of the innocent.

There’s a man on death row, a former client of Joe’s, who’s scheduled for execution soon. New DNA evidence could free him, but Joe can’t get a judge to look at it.

There’s one of Joe’s oldest friends, a fellow lawyer, who angers a petty and narcissistic judge. Soon he finds himself with his license suspended and headed for jail. And that’s just the beginning of his troubles.

There’s a lovely young woman, liked by everyone, who hides secrets of past victimhood. More victimhood lies in store for her.

It’s a tribute to author Pratt’s skill as a novelist that a story with this much tragedy and unfairness in it isn’t a complete downer. But he manages it. I’m impressed.

Recommended. Cautions for the things you’d expect. It can get pretty intense. 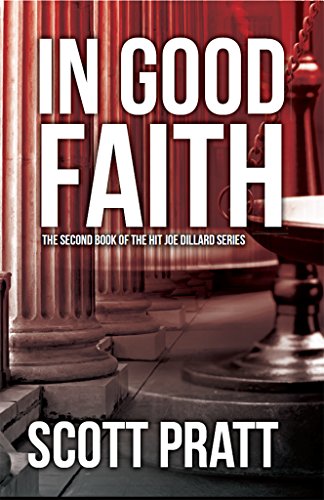 This is the second novel in Scott Pratt’s Joe Dillard series. In In Good Faith, Tennessee lawyer Joe Dillard, disillusioned with criminal defense law, joins the district attorney’s office. Right out of the chute, he draws a horrific crime – the murder of a family of Jehovah’s Witnesses at a rest stop. Soon after that a retired high school principal and his wife are murdered. All the killings include a signature mark – a shooting or stabbing wound to the right eye.

This book skirts the edges of supernatural horror – the concepts of mental telepathy and telekinesis are part of the story and taken seriously. At the center of the crimes is a beautiful young black witch. And as an ally against her power, Joe discovers a psychically gifted young woman who has a strange link to the witch.

The question of religion is particularly strong in this book. Joe’s troubled sister is living with a “Christian” man, a pillar of the church, who turns out to be a violent addict (hint to all women thinking of getting involved with a “Christian” man. If he wants to shack up, he’s a hypocrite). “Black” and “white” witchcraft are central to the story, which is problematic for the Christian reader. Joe, a lifelong atheist, has a breakthrough of some kind of faith, but it’s not clear exactly what he believes in.

But still, a harder line could have been taken against Christianity if that were the author’s purpose, so I can’t criticize the book much on that score.

In Good Faith was exciting and well written, and I cared about the characters. Recommended, with cautions about the supernatural stuff. Also, language and adult themes. 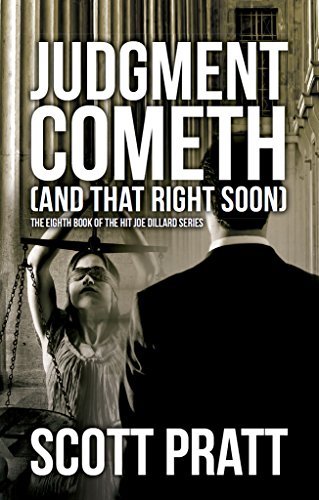 It wasn’t until I’d finished Judgment Cometh (and That Right Soon) by Scott Pratt that I realized I’d read a previous book in this series. That was An Innocent Client, which introduced the continuing character of lawyer Joe Dillard of Tennessee. I clearly remember composing a review, but if it was ever posted, it’s disappeared altogether from the internet.

In this eighth installment, defense lawyer Joe Dillard takes the job of defending a young man accused of the murder of four judges. He was stopped for driving drunk, and a pair of coolers containing the disarticulated and frozen body parts of the latest victim were found in the back of his pickup. Joe believes the man innocent, and gets the case thrown out.

But that’s not enough for Joe. The real killer is out there, and is very bad news, so Joe starts looking for him himself. He uncovers a pair of the most monstrous murderers he’s ever encountered.

This is a compelling story, and Scott Pratt is a good author. He gives us interesting characters, good writing, and sharp dialogue. Joe’s dealings with his wife (who has been battling cancer) are presented with insight and empathy. His attitude toward religion, which comes up more than once, is hard to gauge – which is probably a good approach.

I disliked some elements of the first Joe Dillard mystery, and read no more. But I’ve picked the series up again with Book Number Two, which I’ll review soon. Scott Pratt has earned another chance with me. He’s good at what he does.

Cautions for language and intense cruelty and violence, though it isn’t overly graphic in presentation.