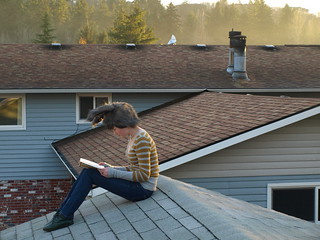 “We train as researchers but spend our days managing the emotions of late adolescents, haggling over budgets, and figuring out how to use Moodle’s gradebook,” writes Jonathan Malesic, who used to teach at King’s College in Wilkes-Barre, Pennsylvania, before he burned out.

“Eventually, I came to dread every class meeting.”

He describes his experience and some lessons learned.

Chronic dislocation produces the three main components of burnout: exhaustion, cynicism, and a sense of professional ineffectiveness. Burned-out professors, then, are people who cannot muster the strength to do the intellectual labor of their job, who see students as problems, and who feel their work has no positive effect.

After 11 years of teaching English at a public high school, Ken Lovgren left the profession, mostly because he was drained by the insistent emphasis on collaboration and group work. Engaging in a classroom that was “so demanding in terms of social interaction” made it difficult for him to find quiet space to decompress and reflect. “The endless barrage of ‘professional learning community’ meetings left me little energy for meaningful interaction with my kids,” he told me.

I did my first seminary lecture today. It went OK, I think. My talk wasn’t as long as I thought it would be. But we had a good discussion time to fill it in.

I’ll bet you think I couldn’t work the Vikings into a lecture on pastoral theology, don’t you?

Well, I managed it.

The busiest couple weeks of the year continue. But pressure is easing up in the library at last – I have adjudged my two new assistants qualified to range freely, within limits. Which gives me time to do other stuff. And other stuff need to be done.

I found out I’ll be doing my first seminary lecture (first of two) Thursday morning. That was somewhat short notice. But it’s not as if I haven’t been preparing. I just need to organize my piles of notes into a PowerPoint. And I’ve made a good start. Still, it’s a little daunting. If you like to pray for trivial concerns, you might remember me Thursday.

I think I figured out why they asked me to lecture on the historical roots of our conception of the pastorate. There’s been some concern in recent years, from certain quarters, that our seminary – while maintaining a high view of Scripture and Lutheran orthodoxy – has lost sight of its roots, the semi-romantic 19th Century dream of a repristinated New Testament congregation. They wanted somebody to explain our beginnings and the reasons why we do things in the (rather eccentric) ways we do them. As editor and translator for the Georg Sverdrup Society journal (devoted to the works of a founder of our tradition), I guess I qualify as a kind of an expert. There’s one guy who wrote a doctoral thesis on Sverdrup who certainly knows more than I do. But he’s retired. And another fellow who probably has a better global grasp on the historical factors than anybody alive. But he’s busy teaching other classes.

So I guess I qualify as a kind of an expert, in a very small niche. Funny how expertise snuck up on me. I never planned on it. It’s kind of like rummaging in your pockets and finding a candle snuffer in there. And you don’t remember buying one. But what do you know? There’s a candle right here that needs snuffing!

On the translating front, I hear that my next project will be a book on “the right of resistance,” the ancient Viking law that allowed the people of the land to rise up against, and kill, kings who got too big for their britches.

I think it will go over well among Deplorables.

I have reached another level in my carefully plotted strategy for world domination. I have agreed to teach three class periods in the seminary this fall. One hour on how to write research papers, and two on the historical background of the Free Lutheran conception of the pastoral ministry.

In what is tediously known as the Real World, of course, it’s not that big a deal. I don’t have faculty status. But I’ve always had great respect for academics (or I did until the field in general got turned into an exercise in political flacking). That’s probably one of the reasons I always resisted graduate study – until it became a necessity – I felt unworthy. Though I’ll admit it was mostly a matter of laziness, and finding school both boring and annoying.

It wasn’t a surprise. We’d discussed the idea before, and I’d done some preliminary preparation. But today it was confirmed, and the writing class is on the calendar.

For me, it’s kind of a big deal. I don’t think I’m cut out to be a teacher, but I do love lecturing. Pay attention to me!