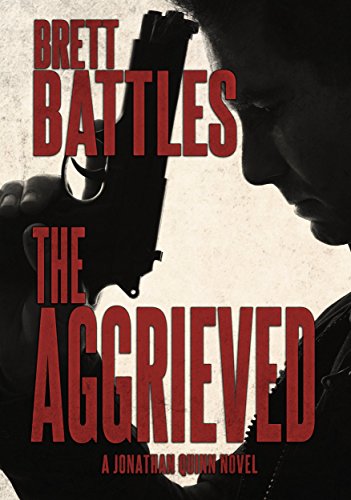 I’ve been following Brett Battles’ Jonathan Quinn series for some time now. I’m not generally a reader of espionage fiction, but these books deal with a different kind of character, a guy whose job tends to be a throw-away in other books – the Cleaner. The cleaner comes in after a hit has been carried out, and removes the bodies and all the evidence. Jonathan Quinn is the best at his job, and his skills make him more than equal to various challenges he meets that take him outside the limits of his job description.

In The Aggrieved, Jonathan and his team face a new kind of challenge. In earlier outings they generally ended up trying to rescue somebody. This time, due an incident at the end of the last book (I’ll write carefully, so as not to drop spoilers), they’re out for vengeance. An important member of the team has been killed, and Quinn and company are singlemindedly pursuing revenge. Meanwhile their own relationships are strained, as guilt generates resentment among friends and even family.

This was not my favorite installment in the Jonathan Quinn saga. I think that was largely due to the revenge motivation, although the author makes it clear that the killer they’re pursuing deserves no mercy. The book seemed to me essentially a sequence of planned operations, some more successful than others, without a lot of human interaction – and most of what there was, was unpleasant.

I did enjoy a fairly new character named Jar, a female Asian computer geek somewhere on the autism spectrum. She was kind of fun.

If you’ve been following the books you’ll want to read The Aggrieved, but don’t start with this one. Cautions for the usual.