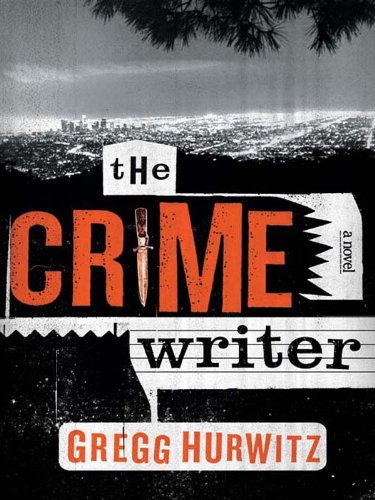 “A story. We all are, but this segment of my life has a pleasing structure to it.”

“Maybe that’s why it happened to you.”

“I don’t believe in intelligent design.”

“Sure you do.” She waved a hand at the book spines in all their eye-catching glory.

Drew Danner, the hero of Gregg Hurwitz’s novel The Crime Writer, is precisely that. He writes crime thrillers, and has gotten a movie deal and a TV series. He’s kind of a minor big shot in LA.

Until the day he wakes up in a hospital bed with a cop watching him. He is informed that a brain tumor has been removed from his head, and that he has murdered his ex-girlfriend. He can’t remember anything about it.

Drew gets off on a temporary insanity plea, thanks to the tumor, but he’s haunted. He needs to know whether he did this thing or not. He becomes even more frantic after another woman is murdered, with evidence pointing to him again. Has he become a danger to society, homicidal during blackouts?

His investigation (in which he learns, embarrassingly, that he knows less than he thought he did about the things he’s been writing about) leads him to meet an emotionally fragile, damaged woman with whom he begins a relationship. In Hurwitz’s trademark style, the tension zooms rather than ratchets up, and the stakes are soon greater than just Drew’s freedom – they involve his sanity and his very sense of himself.

I think I liked this book better than any Hurwitz I’ve read to date (I also think it’s the first thriller he wrote). Aspects I appreciated included some Christian characters who were treated simply as decent human beings, without a trace of condescension. There was a homosexual character who was so subtly revealed that you only began to suspect his orientation gradually, as is often the case in real life. And – perhaps for the first time in a novel for me – there was a sex scene that actually did advance the plot. It was done in good taste, and was very touching.

I probably need to mention that I did figure out whodunit fairly early on. That didn’t really bother me, though. I loved The Crime Writer for its own sake.

Highly recommended. Cautions for the usual.